Less than a week after capturing his first European Tour title and Matthew Zions found himself being into the spotlight.

The player, whose bio details appear last in the 2011 European Tour Official Guide, had broken through to capture the Saint Omer Open in northern France. 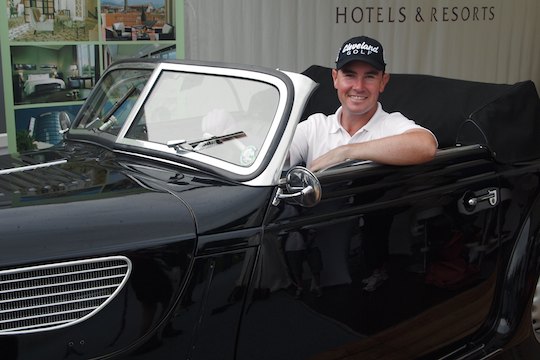 Zions ended a 45 European appearance run to win for the first time.

And win he did, by a massive seven shots to collect the €100,000 first-prize cheque and a jeroboam bottle of champagne.

Four days later and the Gosford-born golfer, who grew up in Kempsey, found himself being grouped with double US Open winner, Retief Goosen and Ryder Cup winning star, Miguel Angel Jimenez for the opening two rounds of the prestigious BMW International Open in Munich.

“I have to admit when I saw the draw that the thought of playing alongside Retief and Miguel made me feel a bit nervous,” said Zions.

“I was a bit shaky too on the first tee but both Retief and Miguel made me feel really comfortable.”

“I had played a practice round with Sergio Garcia and Luke Donald in the 2007 British Open but in terms of tournament golf, I’ve never played in such company before.”

“I had been hitting the ball well and coming off a win like last week should always help make you at ease.”

“So it was fun playing with Miguel and Retief and especially Retief, as I love watching his swing while Miguel is very animated.”

“Being up close and watching them play this game sort of makes you realise you are just as good as they are.”

“And to win a golf tournament just reassures you that everything you are working is right.”

The weekend of June 18 and 19 had proved one of the most memorable days in Australia golf for several years.

Firstly, Bryden MacPherson captured the British Amateur at Hillside in England, a year after Melbourne resident Jin Jeong won the title at Muirfield.

Zions then won in France while in the States, Jason Day continued his impressive majors form in finishing runner-up to Rory McIlroy at Congressional in the US Open.

And to top it off, on the secondary Nationwide Tour, Hobart’s Matthew Goggin set about re-establishing himself on the main PGA Tour in 2012 with a second victory this year in capturing the Wichita Open.

“It was a pretty good weekend for Aussie golf and it’s nice to see Matty Goggin winning again because he’s such a good player,” said Zions.

“It’s only two years ago when he went so close in the British Open but with Jason Day playing so well, it shows that Australian golf is still in pretty good shape.”

Zions admitted his success in France had to be due to the inspiration gained in Andrew Tampion winning the Challenge Tour Telenet Open in Belgium.

Tampion is one of Zion’s closest friends on Tour in Europe and his victory at Royal Waterloo was his second after breaking through three years earlier in Ireland.

“Tamps and I are very good mates and it was great to see him win again as he’s had rough time in trying to get back on the main Tour,” said Zions.

“But seeing him win in Belgium shows that you can never stop believing you can win out here.”

“No one ever presents you with a tournament victory and no matter how hard you try, and how many sacrifices you make, you still have to go out there and do it.”

Zions had been two over par after just three holes but then recorded rounds of 68-72-67 and a final-day 69.

“It’s great winning my first tour event but I have to say, I never thought I would win by seven strokes,” he said.

“But it was one of those weeks where I felt in the zone – (Frenchman Thomas Levet walks past and reaches out to shake Zions hand) – and that’s what nice about this game because I have had so many people come up to congratulate me.”

“So come Sunday, I thought the course was mine for the taking.”

Given the event was a dual European and Challenge Tour event, it means Zions received only a one-year exemption instead of the normal two years.

But it’s the luxury of knowing he’s now into all the big events on this year’s Race to Dubai schedule that delighted the 32-year old the most.

“You always hope that when you tee it up on a Thursday that it will be the week where everything clicks – and Saint Omer was that week,” he said.

“From the time I was hitting balls on the range on Thursday it just translated into making scores and that’s not always happened for me.”

“But then at the end of the day it’s the putter that helps you win tournaments, and I just putted so well.”

“I must have missed just two putts a round and all my bogeys, except for one hole, were three putts.”

Among the first to congratulate Zions was good friend and financial supporter, Grady Durham who lives in Denver, Colorado where Zions’ family also reside.

“There had been times over the fall and the winter breaks that I felt like packing the game in but Grady was always positive and driving me to continue,” said Zions.

“He lives in Denver and he’s a very successful businessman, and has been one of my biggest supporters, not only financially but mentally.”

“I finally got to speak to him two days after winning and he was over the moon.”

“I’ve got a lovely trophy to keep, a decent size pay cheque, a huge bottle of champers plus I kept the ball I played with – even though I nearly threw it away.”

“I also got a ride back to England with Nick Dye, who works the European Tour radio, so he drove me home to Egham, where I’m based in the UK.”

“And when I got back to Egham, I went to my favourite fish and chip shop that was still open for a fish supper.”

“It was just a great way to finish off a great day.”