Nobody understands sacrifice better than a professional athlete. Passing up family occasions and social milestones for the sake of competition is a hallmark of a true professional. 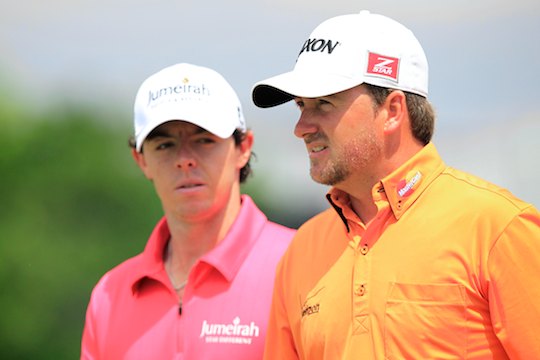 McDowell and wife Kristin had been on the guest list to witness world No 2 McIlroy, and new bride Erica tie the knot in what was a lavish event at the glittering Ashford Castle in Ireland.

However, McDowell politely declined in order to regain winning form ahead of last weekend’s $US6.2m Valero Texas Open in San Antonio in which he finished tied for 27th behind Kevin Chappell.

“I explained to Rory, and he very much understood, that I just need to be playing at the moment and that’s the reason for entering this week’s event in San Antonio,” he said.

“And if it gets me an invitation into next year’s Masters that would be fantastic.”

McDowell failed to qualify for the Masters earlier this year due to his low seeding of No 83 in the world. It’s been almost two years since McDowell was placed inside the top 50…a benchmark that assures entry into all four Majors.

The weekend marked McDowell’s first appearance at the Valero Texas Open since 2015, when he was forced out in the first round with an ankle injury.

After a solid top 30 finish at Hilton Head last week, the 37-year-old is trying to build up some momentum going towards the US Open, the one major he has won.

“I am just hoping I can get the putter working. Last week could have been anything had half of those putts I only just missed dropped,” said G Mac.

“So, the good thing is I am trending in the right direction and overall my golf is in good shape.”