World No.3 Rory McIlroy has had just two caddies in his pro career, both Irish and now each bizarrely sacked before or after a Royal Birkdale Open.

The first was Derry-born Gordon Faulkner who actually began caddying for McIlroy in the weeks before he turned pro in late 2007. 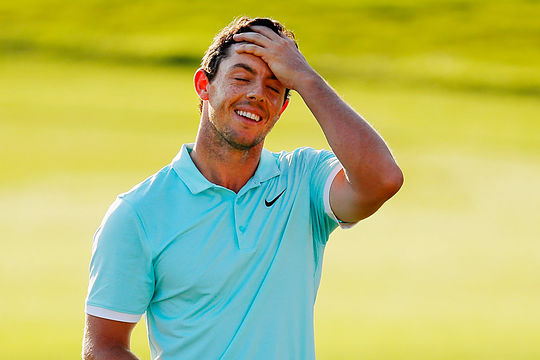 Faulkner had been recommended by Darren Clarke who had first used Faulkner whenever he played a social round at the exclusive Queenwood club.

Faulkner then made his way onto the European Tour and was on the bag with Aussie Wayne Riley when “Radar” defied the likes of Nick Faldo and Colin Montgomerie to win the 1995 Scottish Open.

Faulkner caddied for McIlroy in his first 22 Tour events but after sharing 19th place in the 2008 Scottish Open and in the process failing to qualify for the following week’s Open at Royal Birkdale Faulkner was controversially shown the door by McIlroy.

In stepped J.P. Fitzgerald, who had caddied for Paul McGinley and Clarke before moving to Ernie Els in 2007. Fitzgerald didn’t last long with the South African and was sacked two weeks before the 2008 Open.

The official line from ISMs Andrew “Chubby” Chandler, and who was managing McIlroy at the time, was that Fitzgerald was now on McIlroy’s bag “to take Rory to the next level in his career”.

Why Faulkner, who now caddies for Andrew “Beef” Johnston, could not have taken McIlroy to that “next level” still remains a golfing mystery given the talent clearly oozing from McIlroy.

There was silence from the McIlroy camp on Monday, though, apart from manager Sean O’Flaherty telling the Golf Channel: “Nothing to share. Rory will address all questions on Wednesday in Akron.”

The question now beckons after a similar controversial sacking of Fitzgerald – who is to now take McIlroy to this newest level in his career?

Under Faulkner, McIlroy earned his 2008 European Tour card in just three 2007 events, and then secured 2009 membership in 18 events.

With Fitzgerald calling the shots, McIlroy won four Majors, two WGC titles and 18 other victories around the globe, and along the way climbed to World No. 1.

As well, the teaming of McIlroy and Fitzgerald contested four Ryder Cups including being on three consecutive victorious European sides.

However, it is now been 10 months since McIlroy last won and that was last September’s Tour Championship in Atlanta.

But as anyone who closely follows pro golf knows only too well and that is the caddy is always first to go when a golfer is in decline. Take Lydia Ko or Phil Mickelson.

Of course, McIlroy and Fitzgerald will remain friends but the golf world waits to see who will now fill this guaranteed millionaire status caddying void.

McIlroy’s concerns would seem not Fitzgerald but all mental.

Since his new season started in South Africa McIlroy has been suffering from a combination of nerves and a lack of confidence.

Heading to Royal Birkdale, McIlroy had missed the cut in three of his past four events – the US Open, Irish Open and Scottish Open.

McIlroy’s poor form, he said, had “got in my head” and left him with “just not as much belief in myself as I should have had.”

But, with a little verbal on course “abuse” from Fitzgerald, it seemingly all started to come back to him in sharing fourth at Royal Birkdale.

Well, that is what we all thought!