World No. 1 Rory McIlroy has been afforded a second season-ending play-off green light despite being unable to contest the mandatory minimum number of tournaments on either the PGA and now the European Tour.

Last week the PGA Tour afforded McIlroy a ‘concession’ to compete in the FedExCup Play-Off Series given he had only contested 10 of the 15 events required. 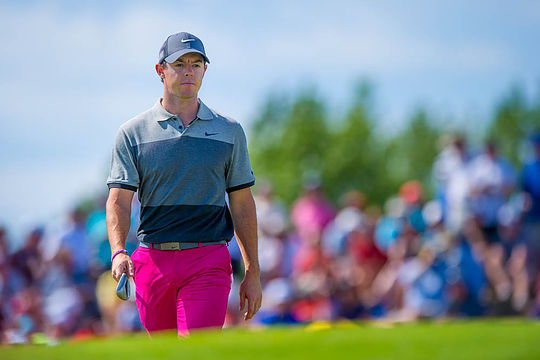 Of course, McIlroy was out injured for some six weeks and missed the defence of his Open Championship and WGC – Bridgestone Invitational titles.

However the PGA Tour confirmed McIlroy did not seek a ‘minor’ medical exemption but knowing the ‘worth’ of McIlroy to the Tour Commissioner Tim Finchem has waved his magic wand to allow to contest the remaining three Play-Off Series events commencing with Friday’s starting Deutsche Bank Championship in Boston.

The European Tour has followed suit with new CEO Keith Pelley waiving the mandatory 13-tournament rule to allow McIlroy to remain in the final 2015 Race to Dubai and be automatically eligible to compete in The Final Series, despite not meeting the minimum event requirements.

In fact, McIlroy has only played nine European Tour counting events and indicated recently he was planning to play just two other events namely the November 5th starting WGC – HSBC Champions in Shanghai and the following week’s DP World Tour Championship in Dubai.

However in discussion with Pelley, McIlroy has agreed to add a further European Tour event to his schedule thereby bringing the number to 12 and one less under the mandatory 13 to retain European Tour membership.

It is unsure what the tournament may be as McIlroy mentioned at the recent PGA Championship he was expecting to contest only the WGC – HSBC Champions in Shanghai and the season-ending DP World Tour Championship.

Keith Pelley said: “These are exceptional circumstances and I have taken this situation and the resulting decision very seriously. I have spent the last two weeks examining every angle and every possible solution and I have spoken with Rory and his team, as well as independent medical advisers and some prominent players.”

“After reviewing and discussing all the medical reports and recommendations from Orthopaedic surgeon Dr Andrew Adair, physiotherapist Dr Steve McGregor and our Chief of Medical staff Dr Roger Hawkes – while at the same time recognising that Rory is a world golfer with global commitments – I am convinced that he could not commit to any further tournament participation without risking further injury and persistent weakness to the ankle in the future.”

“Therefore, after lengthy discussions, I have given him approval to play a minimum of 12 European Tour events this year.”

Dr Roger Hawkes said: “From the evidence presented to me, in my view this is a potentially serious and significant injury. There is a risk of permanent instability of the ankle which could seriously affect both his golf swing – you need stability in the left ankle during the follow through – and for walking safely on uneven surfaces.”

“Although he played again after a few weeks, he will need close attention for about a year. The suggestion of a reduced schedule and, wherever possible, avoiding ‘back to back’ events is, in my opinion, sensible and important to allow adequate healing and reduce the chance of the complications mentioned which could clearly jeopardise his career.”