McIlroy hits the range for the first time since March

After a near seven-week break, World No. 1 Rory McIlroy has moved from putting into a coffee cup in his palatial $11m Bears Club mansion and out to the practice range at the famed Florida club.

McIlroy last teed it up on March 12th at the Players Championship in defence of his title, where he birdied his closing three holes to rescue a rollercoaster first round before the flagship Tour event was cancelled mid-evening. 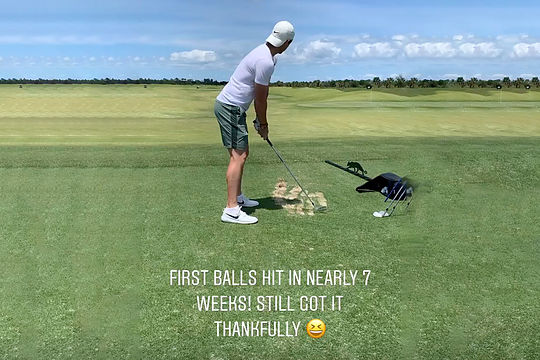 McIlroy gets out on the range for the first time in 7 weeks (Credit: @rorymcilroy)

But in a revelation, McIlroy says there’s no indoor range, no net to hit into and unlike Padraig Harrington or Tiger Woods, no chipping greens, no practice bunkers nor any practice putting green.

“I have none of that as I live on a golf course,” he said.

“So, when I go out in my back garden that’s where I practice, and that’s the Bear’s Club. It’s been closed for some time now but we’re back open tomorrow (April 29th).”

“The thing is it will be a big change from practicing on the rug in our family room though the good thing with the rug, it’s decent and the ball runs true.”

“I will get a mug from the kitchen and a few balls, and you just try and hole some putts but then the rugs only breaks four different ways.”

“But then during these times, it makes you feel just how privileged we are and to have that ripped away at the Players Championship.”

“So, that’s why it’s good that the golf courses down here in Florida are starting to open up again so we can all get back out there.”

McIlroy, who turns 31 on Monday 4th May, also relived memories of his 2019 Players Championship win.

“You lose a lot more than you win in golf, and if you get a 10 per cent win ratio throughout your career, you have had one hell of a career.”

“I enjoy my wins, I celebrate them as much as I can, and it never gets old. It is such a great feeling and it’s what you work hard for, and it’s why I’ve been outside hitting balls for the first time in seven weeks.”

“That was my first journey to getting back to playing on Tour and hopefully having more moments like winning The Players Championship.”