Rory McIlroy has handed his childhood best friend Harry Diamond a gold-lined offer he really could not refuse to now become his full-time caddy.

The four-time Major winning McIlroy is, after hundreds of job offers, keeping Diamond on the bag heading into the 2018 season according to reports by good friend and AGW colleague, Ewan Murray. 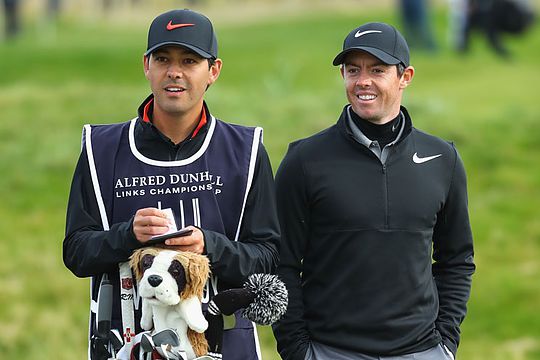 It means Diamond is now likely quitting his job as manager of a number of Belfast and Bangor bars and travelling the globe officially as McIlroy’s club and yardage advisor.

At the time McIlroy stated: “Sometimes to preserve a personal relationship you have to sacrifice a professional one.”

The duo had worked together since 2008 after Ernie Els released Fitzgerald from caddying for the South African.

At the time, Scotland-born Gordon Faulkner had been working for McIlroy and with ISMs Andrew ‘Chubby’ Chandler, who was McIlroy’s then manager suggesting Fitzgerald was taking over the caddying role to take Rory ‘to the next level’. That level included four Major victories, 18 other pro career wins around the globe and four Ryder Cup caps.

Diamond has been McIlroy’s best friend since their childhood days at Holywood Golf Club and was also best man earlier this year at McIlroy’s lavish Adare Manor wedding.

He is a former Ireland international and Ulster inter-provincial player, and was on Rory’s bag as early as 2005 at the Irish Open and as recently as October 2014 at the Dunhill Links Championship when McIlroy was the World No.1.

Diamond, however, had been undecided if he would caddy full-time for McIlroy given his managerial role back home in Belfast.

But the lure of life travelling the globe and working for a golfer, who has amassed $36.5m in his PGA Tour career, would seem far more tempting.

McIlroy said he had been “inundated” with caddie requests since August.

“We’ve been inundated with people wanting to have a chance to carry the bag,” he told media. “I’ve been approached from a lot of different areas.”

The 28-year-old McIlroy will kick-start the New Year at the Abu Dhabi HSBC Championship in January and what will be the start of an unprecedented run of events leading up to Masters in April.

McIlroy will remain in the UAE to compete in the Dubai Desert Classic a week after Abu Dhai ahead of a huge run of events on the North American continent.

All up, McIlroy could be contesting an unprecedented run of new season pre-Masters tournaments given he certainly will not miss contesting both the WGC – Mexico Championship and the WGC – Dell Match Play titles.

McIlroy will begin a run of three tournaments in as many weeks in the US when he again teams with his father, Gerry to compete at the AT&T Pebble Beach Pro-Am from 8-11 February.

After his appearances at the Genesis Open in Los Angeles, possibly alongside Tiger Woods for the first time in almost 3 years, and Honda Classic near his home in Florida, McIlroy has also committed to the Valspar Championship and Arnold Palmer Invitational in successive weeks in March, both in Florida.