Maybe when you have a career that boasts almost $30 million in prizemoney in the US alone and almost as much in Europe as well, you can afford to be generous.

Yet Rory McIlroy’s generosity still took at least one fan by surprise. 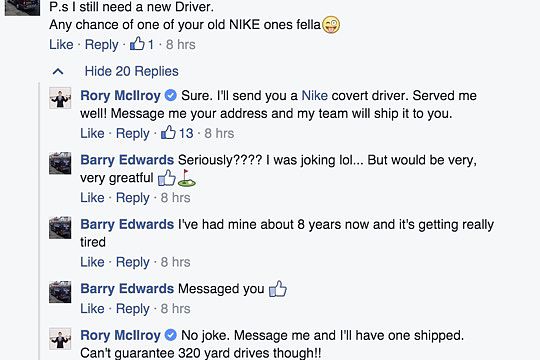 And it all came about from a simple comment on social media, resulting in a surprise and welcome gift the that particular fan.

The fun began when Barry Edwards, a big fan of the Northern Irish star made a comment on McIlroy’s Facebook page.

Edwards joked that maybe Rory could pass on one of his old drivers to him to give his own game a bit of a kick-along.

Naturally Edwards didn’t expect the five-time major champion to actually take any notice of his request.

But it obviously touched Rory’s heart as Edwards ended up with a new driver.

Much to everyone’s surprise, McIlroy (or at the very least the social media manager who runs Rory’s account) agreed to deliver the driver to Edwards.

A screenshot of the actual exchange quickly made it’s way back onto social media and Rory suddenly found himself with a whole army of new fans, impressed by his generosity as photos of the driver going from Rory to Edwards went ‘viral’ online.

It goes to show that even though McIlroy has made a fortune in recent years with his stellar play, he has never forgotten where his golf roots lie and he’s still happy to help out the golf battlers, like Edwards, when the opportunity presents itself.