Irish champion Rory McIlroy stated what most professionals on the US Tour probably already suspected.

Without the late, great Arnold Palmer, there was no way there would be as much money on the Tour in the week-to-week events that the world’s best players get to chase every week. 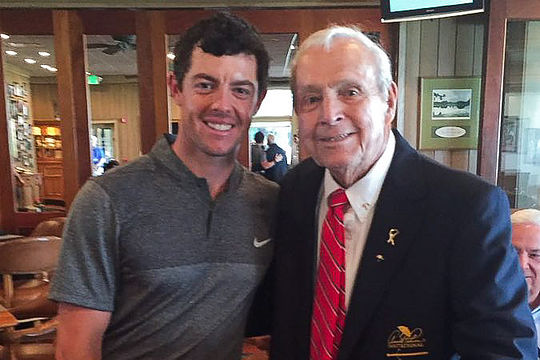 It was a special tribute from the FedExCup champion, who recently banked more than $10m for his end-of-season success.

Indeed it was also revealed that news of Palmer’s passing had purposely been kept quiet until the FedEx and Tour Championship winner had been decided.

Several years ago Palmer joked that he might break McIlroy’s arm if he didn’t tee-up in ‘his’ Arnold Palmer Invitational at Bay Hill in Orlando.

It took a few years but McIlroy did make it to Bay Hill last year and finished 11th.

“It is very sad as the game of golf will not be the same without him,” said McIlroy

“Quite frankly, I didn’t know how many opportunities I would get to play Bay Hill before this day would come so I went there to pay my respects.”

“The good thing was that I got to spend some time with him…and that was really cool.”

“We had dinner and spoke for about two hours. He told me some great stories, and there was that unique smile of his in telling me so many stories.”

“He was a great man and so generous too…you only have to look at the Orlando community and you see his legacy with the children’s hospital, Bay Hill and his tournament…he’s provided a lot of great opportunities to a great many people.”

“Mr Palmer might not have been the most successful player in history – but he was the player that brought the game to the masses.”

“If it wasn’t for him we would not be playing for these obscene amounts of money that we play for every week. And I would not be standing here achieving the success and prizemoney I have earned.”

“That’s why you do see so many guys going to play Bay Hill each year because of the man who was responsible for paving the way for professional golfers.”