Meet one of the eye-catching stars on the European women’s professional tour.

And if Aussies could adopt Melissa Reid as one of their own, you can be sure they would – and apart from Laura Davies, there aren’t too many English we can say that about.

Reid is a stunning blonde who brings a breath of fresh air to the golf course – and turns heads where ever she plays. 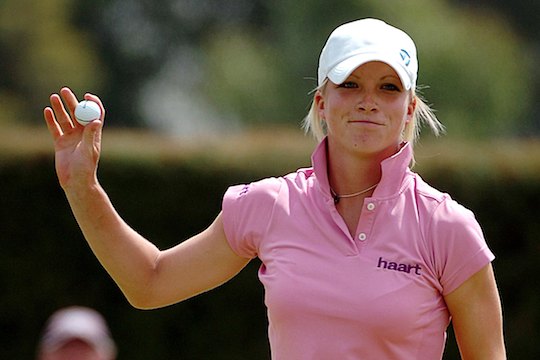 The good news is, the English star is heading back to Australia this summer and sat down with Golfer Monthly’s Michael Court to share her thoughts and ambitions for 2011.

Michael Court: Your memories of Australia. Are they mixed – you so nearly won an Australian Open here when you first turned pro and although you were beaten (Melissa finished third), you really made a name for yourself here. How does it feel coming back and is this your third or fourth trip back here since coming so close at the Women’s Open at Kingston Heath?

Melissa Reid: Yeah, my memories of Australia are really positive. I always look forward to coming back to these events. I just love the country and the courses around Melbourne are absolutely stunning and I always enjoy playing those type of sandbelt courses.

Q: How much has your golf improved since your first visit. Tell us about what success you have had since then?

Melissa Reid: I think my game has gone up a level certainly. I feel like I am a very different player to what I was three years ago. I’m a much more consistent player now than I used to be.

I think I showed in 2010 that even though I’ve only won once, I was still third on the European money list.

I honestly feel I still should have had at least three or four more wins under my belt this year, which is slightly disappointing.

Q: Tell us a bit about learning golf where you grew up in Derby. What is Chevin Golf Club like and when did you realise you could play this game. Who taught you the basics and got you keen and who teaches you now?

Melissa Reid: Chevin is a lovely course in the Derbyshire Dales so the views are stunning. It was a great place to grow up playing golf as there was a good group of juniors and we all got on really well.

We all used to spend every day down there in the summer holidays, from 8am until 10 at night.

I then realised when I was 13 and I got into the England under 16 squad that I must have been pretty good and I never really looked back from that moment on.

I’ve had a couple of really influential coaches throughout my career. My first coach was the assistant at Chevin, a guy named John Tolliday, who really taught me all the basics.

Then I was with Lawrence Farmer for four years and he was a huge influence on my career and taught me what hard work was and what it was going to take to be as good as I wanted to be.

I’ve now been working with Dave Ridley for two years and he is awesome.

He keeps me very grounded and I love working with him as he challenges me all the time, which is what you always need to progress.

Q: You seem more Aussie than half the Aussies in the field – do you feel like you’ve been accepted here and we have adopted you – just a little?

Melissa Reid: Yeah I guess I do a little, I always get asked if I’m Australian, maybe it’s the blonde hair. I have always felt very at home and comfortable in Australia. Everybody has always made me feel so welcome and the support I usually get is great , which is always nice.

Q: OK, let’s get serious, what’s your favourite course? Your favourite event? And the best round of your life, so far?

Melissa Reid: My favourite course is between two – Kingsbarns in Scotland and The Metropolitan in Melbourne. My favourite event has to be the [Women's] British Open, I just love the atmosphere, and obviously as a Brit, its the one tournament out of all of them that you most want to win.

Q: What’s your favourite club and the strongest part of your game? What clubs do you play? What areas of your game do you feel are still improving?

Melissa Reid: My favourite club is my 58-degree wedge because you can do so much with it and it allows you to really use your imagination. My strongest part to my game is my long game: Its usually very solid.

I definitely need to work on my short game, sometimes its magic but other times is shocking – so I try to always work on it.

Q: Who do you travel/hang around with on the tour – who are your best mates on the European Ladies Tour?

Melissa Reid: My best mate is Breanne Loucks. We’ve been good mates for years as we grew up playing together in the amateur circuit, so I usually travel with her, but she has been taking a little time away from the game.

I also travel with Beth Allen, who is a quality girl. The Ladies European Tour is nice because everyone is so nice, you will always find someone to eat with at night etc.

Q: Have you played in the US yet – any hopes/dreams of playing there full-time?

Melissa Reid: I tried to get my US tour card in my rookie year but missed out by a couple of shots. I definitely want to get out there ASAP.

I want to compete against the best players and play on the best courses every week.

I want to be as good as I can be and the only way I’m going to do that is to be playing out there. I will always come back and play as many European events as I can though.

Q: You’ve played in a couple of British Opens and the Kraft Nabisco Championship. Do you notice any differences between majors and normal tour events? What was it like playing in the Kraft Nabisco and in America?

Are there big differences between playing in a major at home and in the United States? Your finishes in 2010 were in the top 40 – What are you goals in relation to the majors?

Melissa Reid: Obviously playing in Majors is awesome. The whole atmosphere is very different to a normal event. I love it.

The Kraft Nabisco was amazing to play in 2010, you just get treated so well and the course was in superb condition.

I want to win Majors in the future and to do that I need to keep playing in them so I get more confidence in my ability.

Q: Who were your idols growing up? And who are they now?

Melissa Reid: When I first took up golf Laura Davies was my idol, which is quite weird as now I’m often playing with her. I always looked up to Tiger and Annika [Sorenstam] and I still do.

Q: What does women’s professional golf need to attract more sponsorships? Are we all doing enough? What can we do to get more sponsors and support?

Melissa Reid: I really don’t know what we need to do to get more sponsorship in women’s golf. At the moment the Koreans are totally dominating and are playing great golf.

I think it would be great for a European, an Australian or an American to take charge and dominate the women’s game like Annika and Lorena Ochoa did.

Q: You’ve probably already answered this, but have you played any golf with the queen of women’s pro golf – Laura Davies. Has she been any help to you and how did you find playing alongside her. Did you learn anything?

Melissa Reid: Laura is just brilliant and I really enjoy playing with her. She plays golf so naturally and has complete believe in the way she does things because she knows that’s what works for her.

I think that’s what I’ve learned the most from her, believe in the way you do things and don’t follow what everybody else does.

Q: We all read about the snake bite in China. Any after-effects. Did it give you much of a fright at the time – or is it all part of the business of golf around the world these days?

Melissa Reid: The snake bite was certainly interesting. It was a bit of a shock but I was really calm about it all.

The funny thing was after I got treated for 30 minutes I had to go finish the hole and I had a 40-yard pitch which I knocked to about six feet and holed the putt for birdie.

Q: What events will you play in Australia – where will we see you?

Melissa Reid: I’m still not 100 percent certain yet but I’m definitely playing in the Canberra event and then the Australian Open and the ANZ Masters. And I can’t wait.

Q: Finally, Melissa, you are renowned as one of the best dressers on the course – what’s your favourite golf outfit? And does it bring you any luck on-course?