Mickelson lights up the socials with ‘dance’ video

Say what you like about American golf star Phil Mickelson, he certainly has the right ‘moves’.

The five-time major champion has a new line of clothing and boy, does he know how to sell it.

Fabulous Phil has been appearing in commercials, on the web, Instagram, just about anywhere you can name doing his thing to promote the Mizzen+Main shirts.

You probably caught a glimpse of them when he turned up at Augusta National earlier this year wearing a long-sleeve button down shirt for his practise round with some guy named Woods, who has a few endorsements of his own. He then launched the product at the Tournament Players Championship.

Now the world-wide web has been saturated with shots of Phil dodging balls on the driving range with some outstanding dance moves. 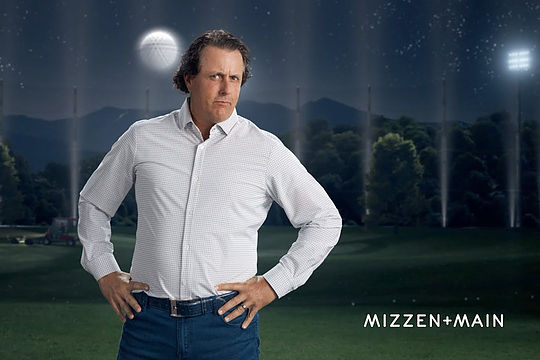 Mickelson lights up the socials with ‘dance’ video

And when he played one of his customary freakish shots during last weekend’s WGC-Bridgestone Invitational Mickelson did a few little dance moves on his way to the green that almost had the internet in meltdown as it did the rounds.

Mickelson does the worm, karate chips balls that are seemingly hit at him on the range, it’s awesome stuff and the ad can only win more fans for the popular American. Not to mention the clothing line.

It could not have come at a more opportune time for Mickelson either as news of his proposed million-dollar match with Tiger Woods on Thanksgiving weekend in Las Vegas appears to have come to fruition.

“But then Amy [Mickelson's wife] said, ‘You should just tell them that you know how to do The Worm.’

“After she said that, it was over, we were doing it.

“I think it’s fun to laugh at yourself, and certainly that’s what I’m doing in this commercial because it was a lot of work just to get those moves out of me.”

Incidentally, Mickelson does have a share in the company so the bottom line is, if the shirts sell, he’s going to finish up the one who’s laughing.