Towards the end of his Twitter-inspired match with Phil Mickelson, Harry Higgs might have regretted poking the bear.

Mickelson, who has over 750,000 followers, six major titles and 45 PGA Tour titles, was challenged by Tour newcomer, Harry Higgs, and Mickelson took the bait. 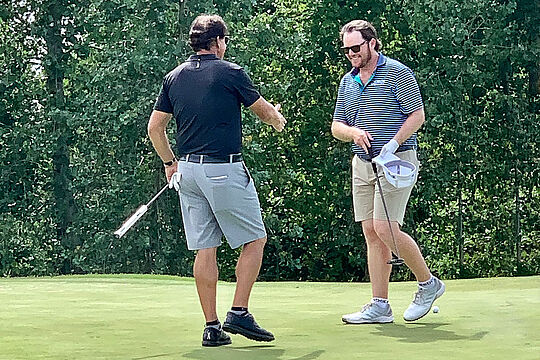 It all started when Harry Higgs told his 40,000 followers he had “some time left on a long flight and I’m bored. Let’s do a little Q&A.”

Higgs was asked: “Who would you want to partner with to take on @PhilMickelson and @TomBrady in the next “The Match”?”

“I’ll play with anyone. And I don’t think @PhilMickelson is ready for my trash talk,” was Higgs’ response.

“I might not be ready for your trash talk but I AM READY for you.”

“All talk until I get invited to one of your coveted matches big guy!!”, said the 29-year-old Higgs.

Happy to move forward, Mickelson first invited Higgs to play during the week of the WGC-FedEx St Jude, knowing full well that Higgs wasn’t qualified for the field that week.

With both players qualifying for the first FedExCup Playoff event at the Northern Trust this week, Higgs suggested that they go head to head at Liberty National…and the match was on.

Trying to get inside Higgs’ head before they had even teed off, Mickelson paired himself with Joel Dahmen, who just happens to be one of Higgs’ closest friends on tour, while Higgs joined fellow PGA Tour pro, Keith Mitchell.

Team Mickelson looked on shaky ground early on at 2-down through their first four holes but did enough to come back and win the match 3&1.

The trash talk came thick and fast from both camps. But in the end Mickelson got the “W” and Higgs can walk away with his head held high.

“Sad news to report that @K_m_Mitchell and I got beat today by @PhilMickelson and @Joel_Dahmen we had a blast and there will be a rematch!” Tweeted Higgs.

“Harry Higgs is such a funny guy and has such great energy, and is fun to be around. He’s a heck of a player,” said Mickelson, who defeated a handful of players including Higgs (T4) on the way to an historic sixth major win at this year’s PGA Championship.