Just when you thought 2020 couldn’t get any weirder, Phil Mickelson has left the golfing world scratching their heads after sending out a cryptic tweet about Tiger Woods this week.

The 50-year-old, who played and won in his first Champions Tour event recently, battled with his nemesis Woods over the course of 20 years with Woods clearly winning that race with 82 PGA Tour titles to Mickelson’s 44. 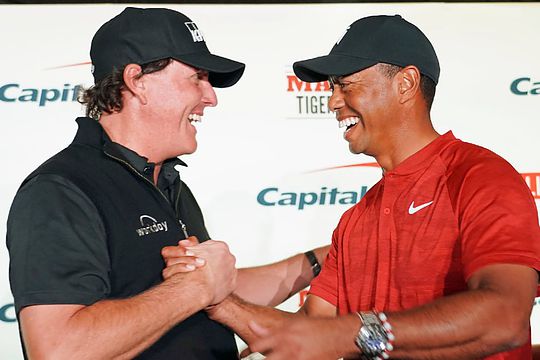 Phil Mickelson and Tiger Woods ahead of The Match in 2018

Woods’ also dominated the World Golf Rankings with 683 weeks at World No.1 while Mickelson spent 775 weeks in the World top-10 but remarkably never got past World No.2.

If you remove Woods from the equation, Mickelson has enjoyed one of the best careers of any golfer in the history of the PGA Tour.

So when “Lefty” took to Twitter with the following tweet, it was hard to tell exactly where he was going with it all.

“Dear Tiger, Thank you for all that you’ve done for this great game of golf. No one has benefited more than me and I just wanted you to know I appreciate you and all you’ve done. That’s all. Thank you.”

Does Mickelson know something we don’t? Is Tiger retiring? Or was it beer o’clock in the Mickelson household and Phil had enjoyed one too many?

While Tiger has yet to reply, both players will meet up again at the US Open in a fortnight’s time and no doubt we’ll find out more then.