Minjee making her way up the ranks

She may be touted by many to be the next big thing, but such accolades don’t register with Western Australia’s Minjee Lee.

“I don’t worry about it, I just do my own thing. I do what I want to do and I just think about my practice and what I need to do in order to become professional.” 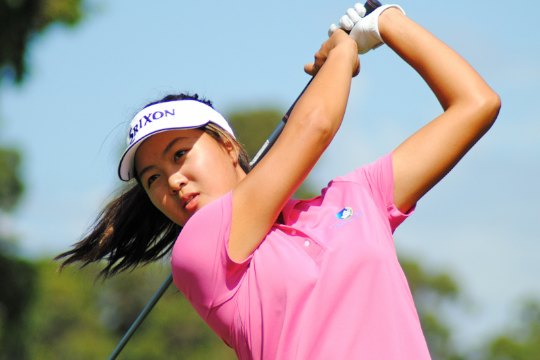 At just 15, Lee has shown she has the game to take her to the elite level.

After narrowly losing the Australian Amateur to the experienced Ashlee Dewhurst on the 37th hole in March, the quietly spoken Lee has gone from strength to strength.

In May she streeted the field at the prestigious Handa Masters at the Vines Resort in Perth, winning by a massive 13 shots over Queensland-based Korean Annie Choi.

Lee led the field from day one after a blistering opening round of seven-under 65, and completed the tournament an impressive 10-under 288. The Masters attracted the cream of Australian Juniors including the Australian Girls Amateur champion Cathleen Santoso and Victoria’s number one Su Hyun Oh.

Oh made the golfing world take notice in 2009 when she became the youngest to qualify for an Australian Open at the age of 12.

Minjee Lee was born in Australia to Korean parents after her Mum fell in love with the country when she attended university in Western Australia.

In fact, it’s Mum Clara, who Lee should thank. A handy golfer herself, playing off a seven handicap, it was mum who introduced Minjee to the game.

“She caddies for me and always encourages me, she doesn’t say much when we are out on the course. She just lets me play.”

After picking up her first club at the age of 10 Lee says she was immediately hooked and although she started with a 43 handicap, after just one round she dropped to the mid 20′s.

“At first I was like ‘Wow, this is gonna be hard to play to my new handicap’ but I just kept improving,” she said.

“I never went backwards and I slowly worked my way down to a better handicap.”

That’s if you call reaching a scratch handicap in just two years slow.

Lee is now a member of the Golf Australia Junior squad and was selected in the Astor Trophy team that took on other Commonwealth Nations in June.

While the team finished fourth behind Great Britain and Ireland, New Zealand and South Africa, Lee was one of the standouts.

Playing number two behind Queensland’s Ashley Ona, Lee lost just one match – a tight encounter against Canada’s Nicole Vandermade where at one stage she held a two-up advantage.

At the British Amateur Championships Lee was the leader after the first round of qualifying but slipped back after the second round to finish even par for the 36 holes. While she qualified for match play, she ran into Wales’ experienced campaigner Amy Boulden and lost 4 & 3 in the second round.

Travelling the globe agrees with Lee and she has no doubts about her future career.

“I want to finish school and hopefully, maybe go to college in America, or just do my training here,” she said.

With a current handicap of +4 Lee clearly has talent to burn. As they say, watch this space.