The British tabloids cashed-in but Ryder Cup captain Colin Montgomerie declared he was lucky to be alive after his flash BMW 750 was written off in a car smash.

Monty was driving along a freeway near Glasgow when a van crossed the central reservation and smashed straight into the side of his ’1 CSM’ registered sedan. 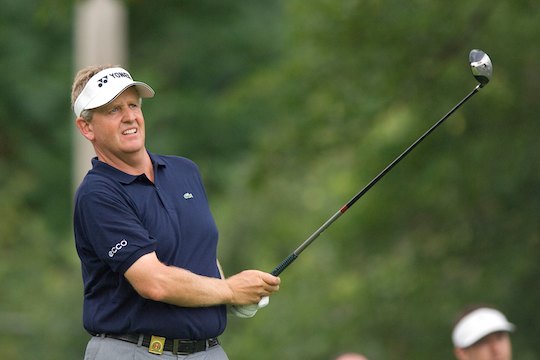 The force of the impact spun Monty’s car around and it was side-swiped two other vehicles before coming to rest straddling two lanes of the A80 near suburban Moodiesburn.

The crash all but ripped the right wheel off Monty’s vehicle with the eight-times European No. 1 pulled to safety via the passenger door by other drivers.

“I was trapped, as the right side of the car was compressed and the air bags were holding me back,” said the shaken Scot.

“The passenger door suddenly opened and I was pulled to safety thanks to other motorists who had seen the accident.

“It was a terrible shock and I am lucky to have come out of it relatively unscratched and that’s thanks to the car I was driving.”

A lorry driver, who witnessed the accident, remarked: “Monty’s car was spinning out of control and he’s very lucky, as he could have easily been killed.

“Thankfully I’d seen an incident developing and slowed down enough to also avoid hitting him.”

Police and fire brigade officers attended while the road was cleared to allow an air ambulance to land.

“Colin suffered shock and severe bruising to his left side after his BMW 7 Series was struck by a transit van that had swerved across the road and into the path of his car.

“Although an air ambulance was deployed, Monty felt it was unnecessary to go to hospital and received treatment at the roadside before being taken back to his home in Perth.”

Police later charged the driver of the transit van over the incident.

However the British press jumped right on the story with next day headlines such as:

And if you do a check on Google you’ll find that the story even made The Himalaya News.