Victorious European Ryder Cup Captain Colin Montgomerie has leapt to the defence of world No. 1 Lee Westwood following a furore to engulf the world rankings.

Monty suggests if US-based players were concerned about an overwhelming European dominance of the rankings at the moment they should follow Tiger Woods and Phil Mickelson in playing more tournaments overseas. 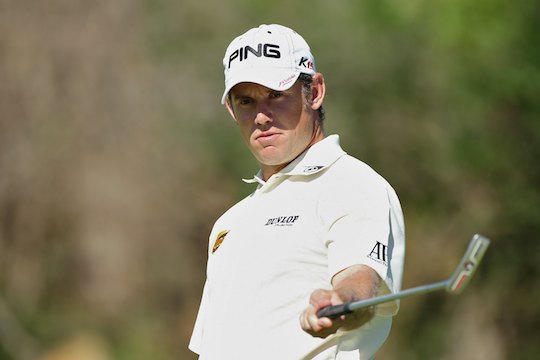 Criticism arose when Westwood went back to No. 1 in the world after a two-month absence when he captured the Asian Tour’s Indonesian Masters.

That ruffled a few feathers, considering the Brit is still to win a major championship.

The fact is the Indonesian event carried a maximum world ranking of just 75 points, which was minimal.

That meant it was lower than the Tsuruya Open on the Japan PGA Tour while by comparison, The Heritage carried 320 points and the European Tour’s Volvo China Open 131 points for the winner.

It was also argued in some US quarters that 10 years ago when Woods dominated the rankings, Westwood winning in far off Indonesia would have not made the slightest dent in Woods’ stranglehold on the No. 1 position.

But Monty’s thrown the world ranking ball right back at the feet on the whingeing Yanks.

“Major championships are one way or the other.”

“I almost got to No. 1 in the world without winning a major, and if I had of won the ’97 Scottish Open at Loch Lomond I’d have been world No 1.”

“So it goes on performance and over two years Lee Westwood has more points than anyone else and he deserves his place. There’s no question about it.”

“What that proves is consistency and not just because you’ve won a big tournament as it is reflected in what you’ve done in all the others.”

“So Lee Westwood is rightfully the best golfer in the world right now and to suggest otherwise is wrong.”

It’s the first time since the rankings were introduced in April, 1986 that Europeans have been one, two and three in the world.

And Monty suggested this had come about, just as it did for Greg Norman who ruled the world for 333 weeks, because the Europeans were global players.

Woods has travelled the world, albeit for appearance money, since turning pro while in recent years he’s been joined by Mickelson, who has regularly contested the Scottish Open, Singapore Open and the WGC – HSBC Champions.

This year Mickelson added the Abu Dhabi HSBC Championship to his schedule and will again contest the Scottish Open.

And earlier this year we saw Steve Stricker in a rare appearance outside of the US when he teed-up in the Qatar Masters, while Dustin Johnson competed in the Ballantine’s Championship and will also contest June’s BMW International Open in Munich.

“Tiger (Woods) has always travelled the world and been a global player, we’ve seen Phil (Mickelson) in recent years travel to European Tour events in the Far East and he was in Abu Dhabi this year which is great,” said Monty.

“But it was the Americans who dominated the world rankings for the last 10 years, so what are they really complaining about?”

“They were getting more points than we were here in Europe for a long time.”

“The only reason they’re complaining is that the more top-ranked players you have in European events, like Dubai earlier this year and Wentworth next month, the more points you generate.”

“But while we see the Europeans willing to travel to Florida, so if the Americans are worried about the rankings why not come to Europe and play Wentworth?”