It was hard enough to get him to open up at the best of times but former British Open champion Kel Nagle, who passed away last week at the age of 94, was actually a terrific storyteller.

The world lost one of its real gentlemen…the 1960 Open champion who never drank anything more lethal than tea and always made sure he had a cake or a bun ready to serve you when you dropped in for a visit. 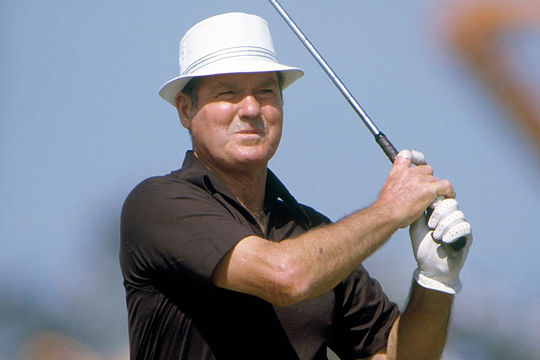 I was lucky enough to do that a handful of times and never tired of getting Kel Nagle to show us his putting stroke with that famous old Acushnet putter, tell us a tale or two and just to catch up with what was happening in golf and harness racing.

Never one to brag about his ability on the golf course, my favourite Kel Nagle story was about the day he burned up the course in a Hong Kong Open, playing alongside his close mate Peter Thomson. It was probably the year he won it, 1961.

I think I have this tale on tape somewhere but it does go something like this:

“There were five par threes on the course we were playing and I managed to make birdie twos on the first three,” he grinned.

“We got to the fourth one and Thommo started to egg me on and said: ‘I suppose you’re going to make another two on this one Kel’,” he said.

“Sure enough I knocked it on [the green] and rolled it in for a two.”

“Then we got to the fifth one and Thommo was really into me: “Go on, make another two, you might as well’,” Thommo allegedly told the 1960 British Open winner.

“Sure enough I knocked it on and holed that one in for a two as well.”

“Yes, it was quite a day and a lot of fun…five twos in one round,” Nagle told me.

Needless to say, I was mesmerised.

Another time I arrived at Kel’s Balgowlah home to find Peter Dawson, the then secretary of the Royal and Ancient from St Andrews had dropped in for a visit.

Didn’t matter…Kel still made a cup of tea for us and welcomed us into his home.

Kel was always a bit “dirty” on fellow professional Dan Cullen, renowned as the oldest professional to qualify for the British Open.

“They can’t call me the old guy with Dan still around,” joked Kel, who was six years younger than Cullen.

Amazingly, Dan Cullen has outlasted the great man, because Cullen, a former RAAF pilot, turned 100 just a few weeks ago.

Kel Nagle’s funeral service is being held today in Sydney.