Nathan Holman: A Star In The Making

Nathan Holman continues to prove why he is one of our most promising players.

At the Master of the Amateurs last month Holman outplayed the strongest amateur field assembled this season, finishing at 10-under-par for a five stroke win at one of Australia’s best layouts, the West Course at The Royal Melbourne Golf Club. 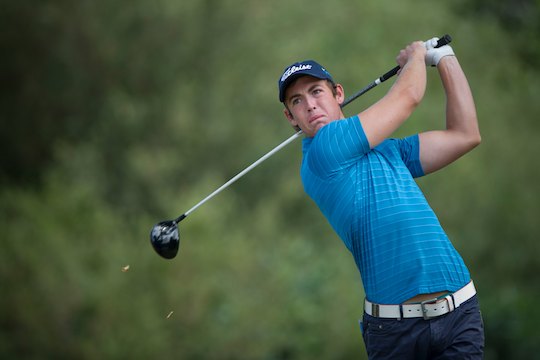 The victory was Holman’s fourth in less than twelve months after securing the Riversdale Cup, Portsea Open and Victorian Amateur in 2011.

The spoils of claiming the Master of the Amateur title – an event that’s arguably become Australia’s most prestigious – has guaranteed Holman starts at the Players Amateur, British Amateur and Canadian Amateur.

Holman’s top form continued at last week’s Riversdale Cup in Melbourne, where he defended his title with a top 8 finish.

With a fixed international schedule pending and a number of major amateur events still to be played in Australia, Holman enters the year with new found optimism and confidence knowing his game is heading in the right direction.

“Having won against an international field gives you plenty of confidence moving ahead,” says Holman.

“I’m scheduled to play three to four events in the UK, including the British Amateur, before returning to the US.”

The next twelve months are pivotal for Holman in an attempt to establish himself against the world’s best on the international stage. This will be his second international tour, having played the US last year with mixed success.

“My aim is to get as many top-five finishes as possible, maybe even take one out,” says Holman.

“It’s an Eisenhower Cup year and international results should get the selectors’ attention. All amateurs want to represent their country at the World Amateur and it’s event we strive to get selected for.”

International aspirations aside, the importance of winning at home at the Master of the Amateurs should not be understated, especially against a field that included US Amateur champion Kelly Kraft and US Public Links winner Corbin Mills.

Holman hails from a golfing family with a long history at Woodlands Golf Club, located in the famed Melbourne sand belt area.

Four generations have played this wonderful layout where precision placement off the tee is equally important as iron play to the small challenging Woodlands greens.

Woodlands was the perfect training ground for Holman who was introduced to the game by his father, Michael, himself a single figure player.

“I would follow Dad and that got me into playing,” says Holman.

“Woodlands is a special place for me. I’ve learned how to shape the ball and the importance of your short game.”

“It’s a layout that challenges every aspect of your game. I’m fortunate to have such a wonderful opportunity and with the support I receive from the members every year.”

Much has changed for Holman from the formative times at Woodlands where he has claimed the Club A Grade Championship title to etch his name on the club’s honour board alongside other family members.

Holman’s immediate goal is to be as consistent as he can and take advantage of the opportunities as they arise. He knows competitive golf can be fickle at times, yet opportunities fall to players that create them.

“I’ll return this year to America better prepared,” says Holman who played his rookie season in the US in 2011.

“Last year was a learning experience and I made a few mistakes. It showed me how hard I needed to work to get to the top level. If you can play yourself into contention at the main events and give yourself chances, a win will eventually follow.”

At present Holman is working towards moving into the world’s top-50 amateur ranking and it’s a motivating factor to do so.

Players inside the magical top-50 mark get starts in events such as the US Amateur on a space-available basis, a higher ranking means no pre-qualification.

Following his win at the Master of the Amateurs, Holman jumped 65 places to be ranked 100th in the world according the the R&A World Amateur ranking system.

Holman knows consistent finishes in Australia in the remaining National selection events, even a win, become important in improving his world ranking.

The win at Royal Melbourne sees him entering the year with optimism after gaining a victory early. Holman is aiming high and there’s every reason to believe he’ll perform well this year internationally.

“If you can be consistent in the US and put yourself into contention at each of their amateur events, you will get that break. You just hope that when the opportunity arises that you’re ready to capitalise on it and get that ‘W’.”