Nicklaus reminds us to look past Sanders’ 1970 miss

Doug Sanders passed away at the age of 86 last week and Jack Nicklaus took to Twitter to honour his friend and remind us all that there was more to Sanders than just his infamous miss at the 1970 British Open, one of four runner-up finishes at majors including the Masters.

And while Sanders, who was known as the “Peacock of the Fairways” for his flamboyant dress sense, was good-humoured about the near-misses, it was obviously something that he carried with him every day. 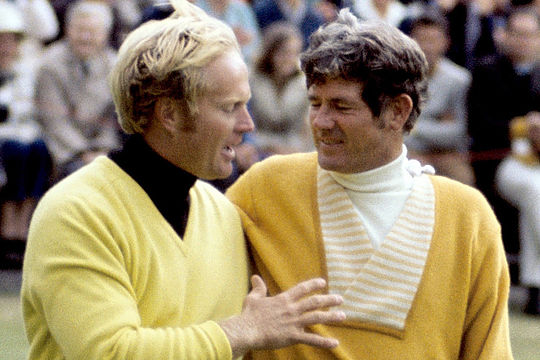 “They [fans] still ask me if I ever think about that putt I missed to win the 1970 Open at St. Andrews. I tell them sometimes it doesn’t cross my mind for a full five minutes,” he joked.

Sanders enjoyed a career that would be envy of any professional golfer. He won 20 PGA Tour titles from 1956 as an amateur at the Canadian Open through to taking down Lee Trevino by a shot at the 1972 Kemper Open.

He was also a member of the 1967 Ryder Cup team captained by none other than Ben Hogan.

“Rest in peace, Doug Sanders. Doug was a character, a showman, a flashy dresser, a bit of everything,” tweeted Nicklaus.

“Above all, he was a terrific golfer, competitor and friend. You never counted out Doug. If he got himself in contention, Doug rarely beat himself and was always tough to take down.”

“Unfortunately, people tend to focus on his four runner-up finishes in majors rather than his 20 PGA Tour wins. But those runner-up finishes only meant that Doug was a quality player and played at a high level, certainly high enough to win a major.”

“He deserves to be remembered for much more. For me, I will remember that Doug was a good friend to Barbara and me, and we will miss him.”