She was a glaring absentee from Australia’s premier women’s events this summer.

Now one of Australia’s top women golfers, at just 34 years of age, is contemplating a new life after being on the road for so many years as a touring professional. 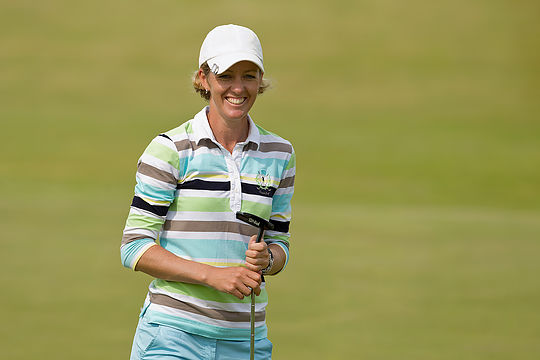 That’s because Nikki Campbell, the pride of Canberra, is just five months away from motherhood.

And when Campbell and her husband, fellow professional Damon Welsford have their first child Campbell makes no secret of the fact she may look at golf coaching instead of touring.

Campbell finished an impressive fourth on the European Ladies’ Tour Order of Merit last year but admitted that barely covered her expenses for the year.

She also missed the Australian Women’s Open and Ladies Masters this season…two events she has figured prominently in for many years.

“I haven’t ruled out playing again, I just don’t know how it’s going to pan out,” Campbell said last week.

“I would probably only go to Europe but they don’t have childcare there and that’s something I’d obviously have to take into consideration.”

“I want to stay involved, whether it be through coaching at a golf club or working with juniors in the ACT or something like that.”

“Having a child I’m going to have to find someone who is pretty understanding with all that, it may not be easy.”

“I’ve already lost quite a lot of strength and don’t know whether that’s temporary or not,” she said.

“Obviously I’d love to keep playing but I don’t know how I’ll pull up and whether I’ll be competitive.

“I definitely want to stay involved in golf, and stay in Canberra.”