When golfers talk about their home club, they are usually referring to the course where they honed their skills as youngsters.

But in the case of gun Queensland amateur Daniel Nisbet, cracking the magical 60 at Caboolture last month was certainly a ‘home’ landmark – all of his 21 years he has lived in a house backing on to the third fairway at Caboolture Golf Club. 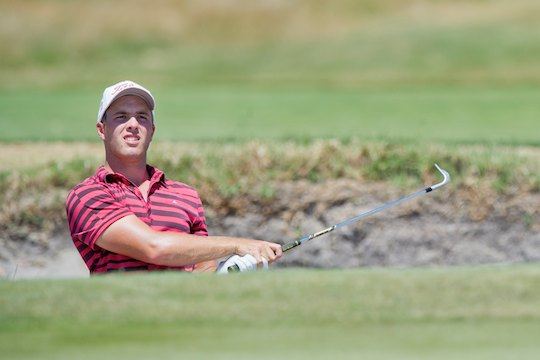 “This is where I started junior clinics at eight years old and have been a member ever since. I feel totally at home when I play here,” he said.

“As a kid I would often jump the fence and practise on and around the third hole.”

And fittingly the third was one of the twelve holes Nisbet birdied on his way to a 12-under 59 in the March Monthly Medal. He hit the 487 metre dog-leg par five in two, but missed the eagle putt.

His bogey-free round smashed the previous course record of 63 held by former trainee pro Matt Stone, but will not be recognised because preferred lies were being played. Nisbet totally understands the ruling, but says that fact does not diminish the thrill of shooting 59.

“That is the best round I have ever played, without doubt. And the fact I did not have a blemish on my card was really pleasing,” he said.

“I knew that because there were preferred lies my score would not go in the record books, but that doesn’t detract from the terrific feeling of my achievement.”

Nisbet started on the back nine and after four straight pars thought he was having just another day at the office. And even when five successive birdies followed for a back-nine of 30, the reigning club champion never contemplated what might lie ahead.

But when he reeled off six birdies from holes 11 to 16 and then parred the par three eighth, a birdie on the longest hole on the course, the 509-metre par five ninth, stood between him and one of the greatest milestones in golf.

“I thought the best way to attack the hole was with caution, so I hit driver and four iron, then chipped a sand wedge to within a metre,” he explained.

“When the putt rolled in my playing partners let everyone in earshot know that something special had happened. It was a great feeling.”

Nisbet’s previous best at his home course was a 63 as an 18-year-old, but that was prior to the course being changed. He has also shot two 64s, at Keperra and Pacific, in Brisbane.

His next major assignment is playing Division One pennants for Yarra Yarra over the next two months, after which he will head to the UK and US to play in major amateur events, culminating – he hopes – in a start in the US amateur championship in August. He will need to hold his current ranking within the top 50 world amateurs to get a start in Colorado.

But he is just as excited about representing Yarra Yarra in pennants, playing some of the best and most challenging courses in Australia.

“I feel really honoured to be invited to play for a club that has such a wonderful history,” he said.