Yet our stocks took a battering for a different reason this month with the imminent departure of Australian amateur champion Shelly Shin, who is returning to her home country of South Korea after eight years honing her skills here. 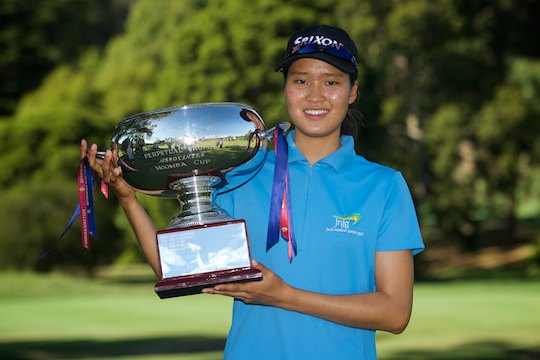 Now ranked the No. 1 amateur in this country, 16-year-old Shin will leave with her family after they took up an employment opportunity in her country of birth.

A liked and respected member of the Concord Golf Club in Sydney, Shin arrived in Australia in 2006, shortly after her eighth birthday, and set about making a name for herself on the course.

She began attracting attention with some fabulous efforts around the state’s junior amateur events when she was just 13-year-old.

As her game developed, she went on to become a member of the Golf Australia national squad as well as the national team.

Indeed she was partnered with Minjee Lee (now professional) and Su Oh when that team won the World Amateur Team Championship in 2014.

Still Shin’s best solo performance was winning the Australian Amateur Championship at The Australian Golf Club at the start of the year.

That saw her elevated to No. 9 in the world amateur rankings.

“I am really sorry I have to move out of Australia and that it has happened so suddenly,” said Shin.

“I am sad to be leaving my friends.”

“I also want to thank Golf NSW and Golf Australia for all the support they have given me these past years.”

“Thank you to everyone who has supported and helped me develop with my golf and as a person.”