Two-time major champion and former World No.1, Greg Norman, hosted his 32nd annual QBE Shootout late last week in Florida, which was won for the third time by Matt Kuchar and Harris English.

The pair carded a 37-under in the multi-format event and won by a record nine strokes over defending champions, Rory Sabbatini and Kevin Tway. 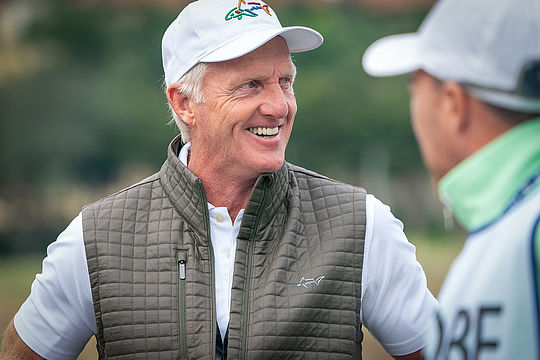 However, it was during the pre-tournament media conference that Norman let slip his small hand in Dustin Johnson’s recent Masters success.

In September this year, the 65-year-old was apparently asked by Johnson, who regularly plays with Norman’s son, Greg Jr, to help with his putting.

“I got a text from DJ around the middle of September. He said do you mind coming out and watching me putt a little bit? I said sure, no problem. We just spent time on the putting green…I don’t think how long it was, an hour, hour and a half, something like that,” said Norman.

“I just talked to him about a few things that I had seen and the difference from him on a Thursday, Friday to a Saturday into a Sunday was a big difference. Some of it was physical improvement and some of it was mental as well, but mental comes from a bad physical or bad technique. So I just talked him through it and all of a sudden he started to feel it.”

“I knew he was always that special player and now he’s starting to realise it. I would think Wayne Gretzky [Johnson’s father-in-law] has a lot to do with that, too. I think Wayne talks to him the right way and certain things in preparation and getting ready to play for a final round or ready to play for Augusta or the Masters at the beginning, I think Wayne’s probably been a very, very positive influence on him.”

While the game has changed substantially since Norman’s heyday, putting is still putting and with 331 weeks as world number one and close to 100 professional wins, it would seem that he still has plenty to offer to those who want to listen.