It won’t be full-time, but Greg Norman admits a return to tour golf isn’t out of the question following some encouraging news on his recovery from shoulder surgery.

While it was recently reported Norman was hoping to be fit and ready to make a one-off appearance at next month’s British Open, news of more ‘regular’ tournament outings will be music to the ears of Australian golf fans, who in recent times have had to be content with seeing the country’s greatest export strut his stuff in the business world. 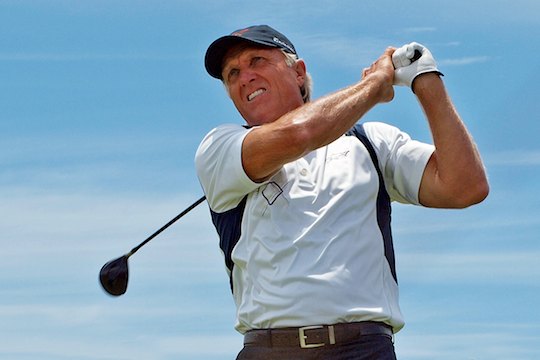 Golfer Pacific posed the comeback question to the former world No.1 during his recent visit to Pelican Waters on the Sunshine Coast, and the Great White Shark admitted he was ‘excited’ to see the end result of reconstructive surgery on a shoulder that has kept him out of action since September last year.

“I’m excited to see what the surgery has done to my golf swing,” Norman said. “Believe me, when you play golf in pain you don’t want to play golf. When I swung the golf club my shoulder popped out of place, then it would have to pop back into place on my downswing. So I’m actually excited to see whether the last 10 months was really worth it.”

And while business and pleasure haven’t always enjoyed an even balance in the latter part of his career, the fact Norman opted to have the surgery is a strong indication of his desire to continue playing competitively outside of his course design, wine and Wagyu beef empires.

“Take away golf, I really could have survived without the shoulder and the surgery,” said Norman, who still owns the tag of Australia’s richest sportsman.

“But quality of life is No.1, and for me golf is a part of that. I don’t want to go back (playing) full-time I can tell you that – I’d like to go back and play a few (tournaments). I still get invited to play tournaments all around the world – I actually had to knock back three this week.”

The 55-year-old spent much of his recent visit Down Under defending his decision to close down the Sydney office of his course design company as he takes aim at the growing market in China. You can be assured there will be no justification required if he pulls off a stunning return to the biggest stage of all.