Norman joins Player in baring it all for ESPN Body

Ever the showman, the Great White Shark got his gear off for a nude photo shoot this week for ESPN’s Body Issue.

Ironically in a week where Australian was mourning the loss of its greatest golfer Peter Thomson, it was also left admiring the body of its second-greatest golfer, two-time British Open champion Greg Norman. 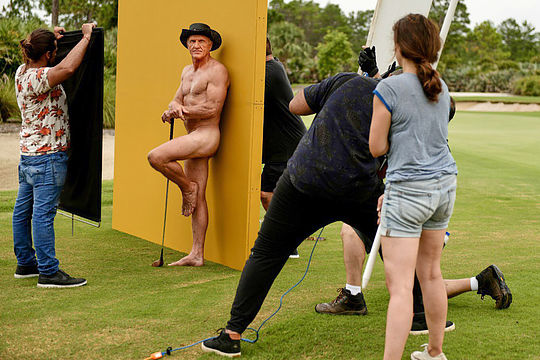 There’s no doubt that at the age of 63, Norman has never looked better and was quite content to let the world know that by posing nude for the American photo shoot.

He’s a multi-millionaire who works out for two hours a day, why wouldn’t you look that good?

And Norman says he quite often walks around naked at home and enjoys keeping fit at his age.

While the Shark hasn’t played anything too competitive on the golf course for about 10 years, there’s no risk he looks fit enough to compete alongside the Ricky Fowlers and the Dustin Johnsons of the world.

And Norman credits much of his incredible physique now to the attention he pays to nutrition.

“My outflows completely dictate my inflows,” he said.

“I won’t put anything in my body that I know I can’t exhaust in my first session in the gym…your body gives you what you give it.”

“So my body’s giving [me] everything that I wanted out of it. It thanks me on a daily basis.”

Not bad for a grandfather of two.

Norman normally spends around two hours each afternoon in the gym, after working from the office of his Florida home from the early hours of the morning.

His third wife, Kirsten says he is tireless.

“He is up at 6am every morning ­making me coffee, says good morning to the kids and then gets straight to work,” she said.

“He sets a goal and never slacks off until it is done. I have not encountered many people with his tenacious work ethic.”