No, not the comments of an irate former caddie but the words of Queensland’s double Major-winning legend Greg Norman in describing the most defining moment he’s seen in golf in recent years. 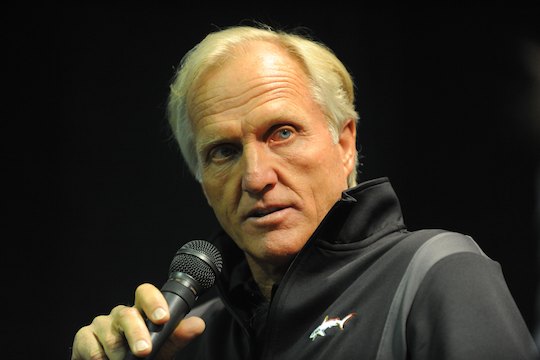 In a golf world long dominated by Tiger Woods, Norman singled out the sight of April 2011 and the likes of the twenty-something’s Charl Schwartzel, Jason Day and Rory McIlroy fighting for glory in this year’s Masters as the moment of the changing of the guard – the moment Woods no longer reigned supreme.

During Norman’s long and illustrious career he had been on the receiving end of some of the most outrageous shots and last round displays that stripped him of further Major Championship glory.

The Great White Shark was unchallenged atop of the world for 331 weeks but since retiring full-time from a full playing schedule in 2002, it’s been Woods who’s taken over as the game’s dominant player.

Not until Sunday, April 10 this year had Norman seen a movement in the goal posts.

“Of all the golf I have watched this year, the last nine holes of the Masters was probably the testament that nobody is intimidated by Tiger Woods anymore,” said Norman.

“When Tiger normally hits the lead he keeps going away.”

“He played great the front nine but he couldn’t do it on the back, and of all places, at Augusta National where you would think he could limp around that tournament.”

“But he couldn’t. There are a lot of young kids who were at Augusta and they’re no doubt thinking ‘Screw you, Tiger! I am going by you’ and blew Tiger away. Then all of a sudden Tiger tried to force the issue. His stroke wasn’t as good as it was on the front nine, and all of a sudden the dynamics changed.”

“That’s where golf changed right there on that Sunday.”

“Louis Oosthuizen set it up winning The Open and Charl Schwartzel took advantage of it, and that was the defining moment in golf over the last five, six or seven years of golf, in my mind.”

And with Woods is such a dominant mood for more than a decade, Norman expressed sympathy for the likes of Colin Montgomerie and Ernie Els, who had to settle for second best to Tiger on so many occasions.

“The kids out there playing now didn’t have to deal with Tiger’s dominance,” said Norman.

“That’s why I feel sorry for guys who went through that tough time, and they’re guys like Ernie Els, Monty and even Phil Mickelson. Take Tiger out of the picture and they probably would now have one or two or more Majors under their belts.