When it comes to accusations of cheating don’t dare get in the way of Greg Norman.

I was in Akron, Ohio reporting on the 1995 NEC World Series of Golf when the Australian accused Mark McCumber of cheating and now 24-years on, the double-major winner has sounded off at Patrick Reed after the Texan was accused of cheating during the recent Hero World Challenge in the Bahamas. 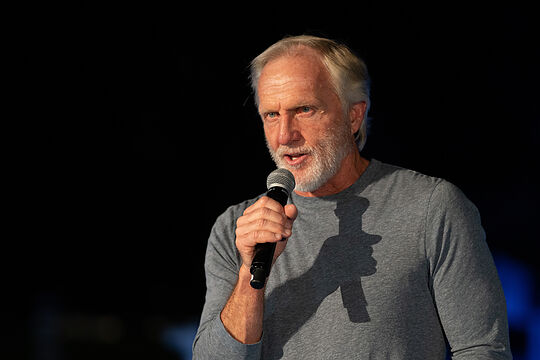 Norman was being interviewed on his American radio show Attack Life when asked about Reed’s actions on day two at the Albany course.

“From my personal perspective, you know, I get really repulsed with that because, to me, you’ve got to protect the integrity of the game, not protect the player,” Norman said.

“Over the years that I’ve been involved with the sport, for 40-plus years, I’ve seen a lot of things happen and, to me, I’ve always been at the forefront of protecting the game before anybody else.”

“I don’t care what it is, whether it is an infraction of the rules, or signing a scorecard incorrectly, or taking an illegal drop, or whatever it is that I see, I will always, always stand on the forefront of protecting the game first.”

The then long-time World No. 1 Aussie was so incensed. McCumber went onto to shoot a 68 and Norman a 73.

McCumber later stated he was swatting an insect but then Norman argued you would normally brush aside any insect.

In those early years of my golf journalistic career I had never seen Norman so angry. Those pale blue eyes could have cut through you like a laser.

In fact, Norman was so mad he said he could have ‘bench-pressed 500lbs’, and he was so annoyed by the Tour in not taking any action on McCumber, and also given there was video evidence in those days, he declared he would withdraw from the tournament.

It took the intervenion of Norman’s wife, Laura and PGA Tour Commissioner, Tim Finchem to finally calm Norman down and for him to agree to remain in the field.

As it turned out, Norman forced his way into a play-off and though missing the 18th fairway on the first extra hole with his tee shot, he played the adjoining fairway before brilliantly chipping-in from 66-feet for a birdie to defeat with American Billy Mayfair and Norman’s long-time good friend, Nick Price.

Norman earned a prize cheque of $US360,000 and in the process become the PGA Tour’s all-time leading money-earner with prizemoney then of $US 9.5m and for what also was Norman’s 16th victory of his 20 PGA Tour victories.

Norman said he was watching last week’s Hero World Challenge on TV and, after seeing what Reed did, immediately texted a PGA Tour official to let them know what had happened and urged them to investigate.

“I feel for not just the pros. I feel for all the amateurs,” Norman said. “Like today when I played in the pro-am, what was the first point of conversation? ‘Oh, well Patrick Reed did it. Can we do it?’ Well, you can’t do that.”

Fellow Aussie Cameron Smith was among those who called on Presidents Cup fans attending the biennial event in Melbourne to let Reed know their feelings and then when Smith found himself up against Reed on day two it reportedly turned physical as the International team surged to a 4-1 lead on day one.

Smith pulled no punches when asked about Reed’s indiscretion before the Presidents Cup kicked off, accusing Reed of a “bulls*@#” excuse when he said he didn’t intentionally clear sand with the back of his club on a couple of practice swings.

“I don’t have sympathy for anyone that cheats,” Smith said at the time.

“If you make a mistake once maybe you can understand but to give a bit of a bulls*@# response like the camera angle, I mean, that’s pretty up there.”

According to Australian Golf Digest, the pair ran into each other — literally — after Reed left the fifth green on the opening day of the Presidents Cup.

Watched by Smith, the Texan nailed a birdie to halve the hole and then made a beeline to Smith on his way to the next hole.

“While no words were apparently exchanged between the two players, they were seen deliberately bumping into each other in clash of shoulders, with one witness referring to it as a love tap that drew a wry grin from Smith,” Golf Digest said.