Maybe it was the golf lesson President Obama had to have and former world No. 1 Tiger Woods certainly found some good points in the US President’s golf game.

But the US press are having a field day after it was revealed that the President’s golf game with Tiger in Florida in 2013 finished up costing the US taxpayers in the vicinity of $4.8m ($US3.6 million). 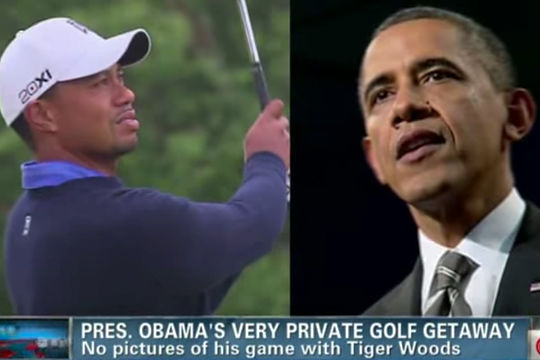 That’s some golf lesson but it’s easily accounted for when you analyse what had to be taken into ‘account’ for the President’s 300th round of golf since being in charge of the world’s most powerful country.

According to the audit by the Government Accountability Office the round at the Floridian Yacht and Golf Club included some instruction from Woods’ former coach Butch Harmon.

According to the US press, the costs included operation of Air Force One, at about $200,000 per hour of flight, plus a virtual squadron of ‘supporting aircraft and U.S. Coast Guard small boats’, as well as per diem and other travel expenses for an unspecified number of Pentagon and Homeland Security personnel required to support the president’s golf weekend.

After the round, Woods delivered a “State of the Game’” on the president’s golfing skills and came up with quite a few positives:

“If he ever spent more time playing the game of golf, I’m sure he could get to where he’s a pretty good stick,” Woods said.

And when asked to describe the President’s best shot Woods admitted that “he hit a few”.

“He’s a pretty good athlete, and we all know he played a lot of hoops,” said Woods.

“We played under some tough conditions, and as I said, he hit the ball well. He’s got amazing touch. He can certainly chip and putt.”