There are many ways to chart a path to becoming a professional golfer. After Goss’ quarter-final result in August in the US Amateur, the route was clear.

Goss is scheduled to take up a scholarship at the University of Tennessee in January and hone is skills on the competitive college circuit. Maybe not anymore. 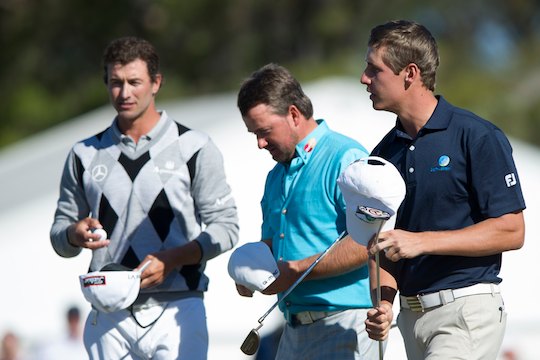 Oliver Goss after the second round of the Australian Masters where he was paired with Adam Scott and Graeme McDowell (Photo: Anthony Powter)

Since the US Amateur in August, Goss has produced some great results. A win at the Western Australian Open, in a hard fought playoff, followed by a third place in the Asian Amateur demonstrates that Goss has got immense talent.

This week at the Masters in Melbourne he made the cut easily at 1-under par and headed into the weekend in a tie 12th. Coincidently, Goss is tied with amateur cohorts Higginbottom and Smith.

Asked if his recent form made him reconsider whether or not three years in the amateur ranks was the best route to a professional career he agreed that the thought had occurred to him to reconsider his next move.

“I was a bit surprised when some people suggested to me that I should turn pro and forgo the college opportunity,” says Goss.

“I didn’t really know if they were serious.”

“I guess that if I had won the Asian Am and gained entry to the US Masters in 2013 that might have been the time to turn pro. For now my plan is definitely to go to the States. My college commitments will allow me to play some of the major amateur events In Europe and in Australasia.”

Goss certainly exhibits maturity and self-control on course. He has a relaxed manner which illustrates maternity well beyond his years.

On the green, and for any hold ups in play, he has a trademark stance; cross legged, arm on hip and leans on the putter patiently waiting. Unhurried.

As for playing with McDowell and Scott he relished the opportunity. He admitted to being disappointed with his opening round and slightly embarrassed finding himself off the fairway a few too many times for his liking.

“I am not overawed by these guys on the course but they do have a bit of an aura about them off course.”

“ I enjoyed the crowd and I really thrive off the atmosphere the crowd creates.”

For the weekend Goss aims to shoot hard. He said he has nothing to lose so he is going for it!

He has received an invitation to the Australian Open at the Lakes. A further opportunity to mix it with the Pros.

The sage advice for aspiring pros is to stay amateur and gain experience. Goss is taking that advice, but who knows he may get in the fast lane sooner than anticipated.