Oliver Goss may not have won the US Amateur Championship title last week, yet he certainly made a name for himself at Cherry Hills Country Club near Denver, Colorado.

Daniel Nisbet, Cameron Smith and Jake Higginbottom are more highly-touted, but none of them made the match play segment of the championship. 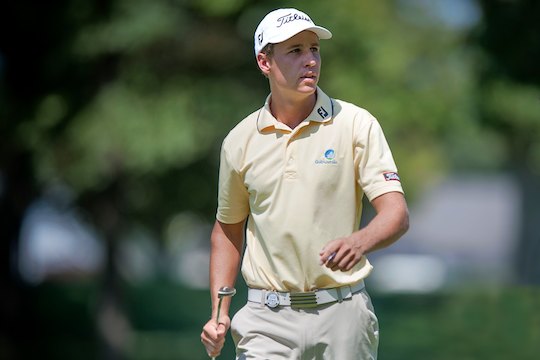 Of the four Aussies to advance Goss was not only the youngest – at 18-years of age – but progressed the furthest, with Justin Thomas ending Goss’ championship chances in the quarter finals with a 2-up victory on the 18th.

It was Goss’ first US Amateur and recent results at international events in just his first season on the main amateur tour have propelled his world ranking to inside the top-40.

Goss’ results at the US Amateur shocked many, as more known players were eliminated and relative unknowns remained. In the process he obtained the respect of the Americans with his booming drives and impressive short game.

Goss won his first match over Eli Cole of Los Angeles, 3&1. In the round of 32, he won in 20 holes over Michael Miller of Brewster. He defeated US mid-amateur champion Bobby Leopold, 2&1, in the round of 16.

“I really loved it and I tried to savour the good moments,” said Goss.

“Playing in front of a crowd of hundreds all day was amazing and I was really pleased on how I handled the pressure coming down the stretch. It was an amazing week and sets me up well for when I return to the US at the start of January.”

Goss will be an incoming freshman at the University of Tennessee and he’s looking forward to the challenge of playing the tough and competitive US collegiate circuit – the development ground for many Aussie professionals with Bryden Macpherson, Aron Price and Tarquin MacManus all former collegiate players.

Goss cannot wait to test his game outside the traditional playing area and comfort zone that most other emerging Australian amateurs play. It is a challenge that he is relishing and one that he is not taking lightly either, knowing too well that results will be hard to come by given the competitiveness of the system.

“This trip also made me realise that I’m so excited to go to college I can’t wait to start,” said Goss.

“I believe it will be some of my best years at the University of Tennessee and know that I’ll have to work hard on my game to get the results. It is just so competitive here in the US.”

With a number of top amateur championship titles already to his credit, including the 2012 Western Australia Amateur (stroke play and match play), Goss has also secured runner-up finishes at the 2012 Australian Amateur stroke play and 2012 Saujana Amateur in Asia.

In international events this season Goss tied for eighth at the Master of Amateurs in Melbourne and finished fifth at the Malaysian Amateur.

It is the international experience which Goss wants to pursue, knowing that to compete at the highest level that he needs to be adept at handling different challenges.

“You learn about your game, how to play different courses and how to score by playing these international events,” says Goss.

“My time in America has shown where I need to improve. It was a new environment for me with the TV cameras and numerous interviews and the autographs. I still don’t think I realise how big these tournaments are and what I achieved at the US Amateur.”

Goss returns to Australia this week and is not scheduled to start college in the US until January.

In the interim he will play the Australian National Trial events, any professional tournaments where he can gain starts and work on his game in preparation for the upcoming collegiate tournaments.

“It is an exciting time in my life for me,” says Goss.

“I am looking forward to returning to America and cannot wait to test my game against the best players in the world. It is something to aim for, that’s for sure, and I cannot wait to do it.”