Queenslander Ashley Ona capped off her first year on the Australasian Ladies professional tour by winning the prestigious Rookie of the Year award and hopes to keep the momentum of a great 2014 season going this week during first qualifying stage for the Ladies European Tour in Morocco.

Ona had a distinguished amateur career representing both Queensland and the National Team. 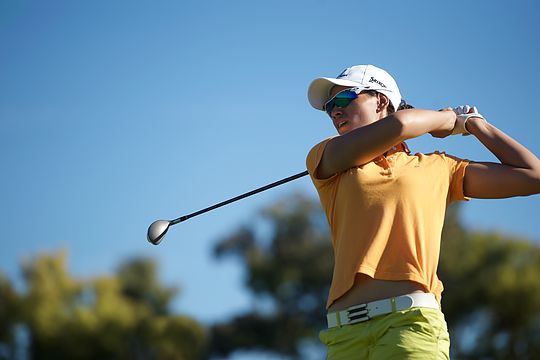 In 2011 she also won an ALPG event, the Canberra Classic and now is eyeing off a tilt at the Ladies European Tour rather than the US Tour.

While playing rights in the US is the ultimate goal for Ona, the first step is to gain experience and exposure in Europe.

“The decision was for me to grow as a person and a player as well, to experience the culture, the golf courses and I guess the whole bigger picture,” said Ona before leaving Australia last week.

“In Europe the competition will still be very tough. I expect it to be an easier transition than trying to compete with the best in the world on the LPGA Tour. That would be really jumping in the deep end.”

The LET qualifying series is being competed at three venues with the leading 29 players and ties going forward to the Final Qualifier to be held 17-21 December, in Marrakech, Monocco.

Despite an extensive amateur career, Ona has adapted well to the professional game and has changed many aspects of her routines.

“Its more than just playing golf,” she says.

“You have to be marketable, your scheduling is harder, status issues prevail, and that’s a whole different factor. I guess I have been fortunate enough to play in some big LPGA events as an amateur which certainly helped my transition.”

“You have to do things 110%, whether it’s going to the coach, the gym, practising and eating well. These are huge factors in trying to play seven weeks straight on tour.”

“As an amateur you might play two events in a row, but trying to keep your body fit, healthy and fuelled properly to play multiple events is the biggest challenge I have had to face.”

Ona is now working with Richard Woodhouse, who is based on the Gold Coast with the pair working hard to get Ona to the next level.

One asset Ona has is her partner and fellow professional golfer, Daniel Nisbet. Nisbet has ambitions to break into the Web.com Tour in the US but the pair plan not to let golf get in the way.

“From the outset we both agreed that we had to pursue our dreams,” said Ona. “It’s working well for both of us, the lifestyle of playing professional golf is just normal for us.”

This week in Morocco will test Ona’s game. Sectional qualifying for playing rights tests the mettle of any player, yet Ona certainly has the fortitude to give it a go and live her dream.