Jason Day has made a habit of overcoming adversity.

His latest battle with a chronic sinus infection is a mere dot on a tough map he has plotted to become Australia’s new golden boy on the US PGA Tour. 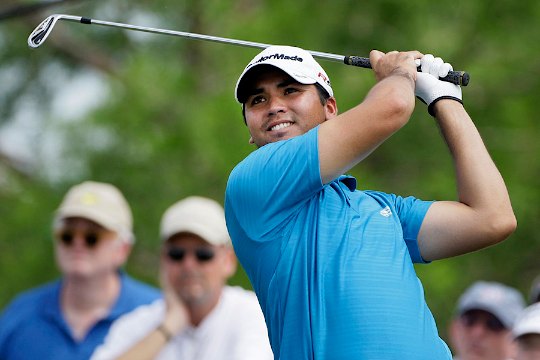 Day officially stamped himself on the international golf scene earlier this year when he took out the prestigious Byron Nelson Championship.

The win catapulted him up the rankings and earned him his biggest payday ever – $1.45 million, along with an exemption into next year’s US Masters.

But to say Day has come a long way since he first picked up a golf club as a three-year-old is perhaps the understatement of the year.

That, of course, was the day his father Alvin handed him a tattered three-wood he found buried at the local rubbish dump in Beaudesert.

Alvin threw the pre-loved stick at young Jason, stood him in front of a tennis ball and watched him take one almighty swing and smash it out of sight.

That was the exact moment his father declared his son would become a champion – but it was going to be anything but a smooth ride to superstardom.

Years of financial struggle followed with life becoming so tough for the Day family that Jason had to pay $5 to fill a bag full of clothes at St Vincent de Paul just to dress himself.

If that wasn’t a tough enough battle, Jason’s father passed away from cancer when he was just 11, leaving the youngster lost and troubled.

He soon hit the bottle, and anyone who looked like they wanted a fight.

With his life spiralling out of control, his Filipino mother Dening packed his bags and sent him off to Kooralbyn, near Brisbane, where he was put through boarding school.

It was a decision that would ultimately change his life forever and link him up with coach Col Swatton, who has since served as Day’s surrogate father, best mate and caddie, literally pulling Day from the depths of despair and placing him on a wave of success.

“Col is my best mate, a second father who took on that role, and most of all we have fun,” Day said.

“He’s taken me through junior, amateur and professional golf, and he understands the pressures of the game. It has never been about the money for him. He genuinely cares about me which is great.

“He’s 41 now so a little older, so he’ll maybe have a few more years carrying the bag but he’s more than happy with that.”

And they say behind every great man there’s a great woman – and Day is no exception.

“My lovely wife Ellie is my number one fan – she always supports me,” he said.

And the rest, as they say, is history as Day continues to make inroads into the toughest stage of them all.

But 2010 could well be remembered as the year Jason Day officially made it.

Several strong performances following his Byron Nelson triumph have many pundits believing he could be Australia’s next Major champion.

But just how good he becomes, and how quickly, could hinge on the successful treatment of his ongoing sinus infection, which he revealed last month had been affecting his balance and breathing for more than four months.

Day hinted surgery could be the only option left after a long dose of medicine had failed to fix the problem completely, although it did help him win the Byron Nelson title.

“I think I’ve got to go back in for a CAT scan and see if (my current treatment) has actually done anything to it. If not, we’ll go in there surgically.

“It’s only like maybe a two-hour surgery. They put you to sleep, which is good, and then they go in and suck it out, but I think the recovery time is like maybe a day or so, which is good. So it’s very easy. I’ll probably do it in one of the off weeks, if I get a chance to.”

Despite his latest setback, Day is confident he can continue his breakout year in the States.

“I think I’ve improved as a player overall,” Day said.

“You know, obviously my driving stats aren’t that great. I’d like to improve my accuracy a little bit. I was a lot more accurate a couple of years ago.

“But I think my chipping and my putting has really improved and over time the experience of playing competitive golf and being in contention and playing against the top class golfers that we have over here and obviously around the world has helped. Just knowing what to do in certain situations and maturing as a golfer.

“And you know, with one win under my belt, I don’t want to just kind of peel out and you never see me again.

“I want to improve and try and do the right things and work on the right things. I want to be smart about my practice plans and where my plan is as a golfer and as a person – where I see myself in five, 10, 15, 20 years from now.”

Let’s hope that image has his trophy cabinet littered with silverware.

But one thing is for sure – you won’t find St Vincent de Paul clothing in his wardrobe anymore.