You only had to see the fans rushing for the vantage points behind him to get a whiff of it.

Then NFL superstar Larry Fitzgerald called a sudden halt to his press conference for the Arizona Cardinals to watch Tiger’s eagle putt on the 18th during the first round. 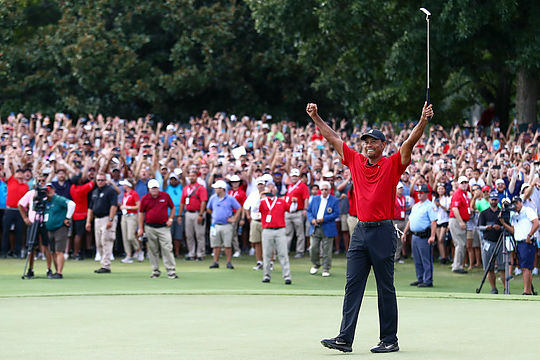 The golf world has had just the hit it needed with the advent of Tiger Woods, capped off, of course, with his win in the Tour Championship last Sunday.

US PGA Tour Commissioner, Jay Monahan insisted the return to full-time competition of a fully-fit Tiger Woods had a ‘tremendous and significant’ impact both on and off the golf course.

But it’s the TV ratings that have Monahan drooling.

“The best way to talk about that is that Tiger’s return has coincided with the storyline of great, young, international and veteran players emerging in spectacular fashion over the past couple of years,” said Monahan

“Tiger comes back and gets right into the competitive mix quickly, and probably a lot faster than everybody thought but no one was willing to admit.”

“You then have this question of how these guys, who have been performing at an extraordinary level the past few years, and how are they going to compete with Tiger now back in the mix…and how is Tiger going to compete against them.”

“Likewise, if you are Brooks Koepka and you win back-to-back US Opens and then win the PGA Championship with Tiger in the mix with a TV rating that Sunday in St. Louis of a 5.4, then that is a 75 per cent increase in the ratings.”

“So that is more people seeing Brooks, hearing Brooks and learning about Brooks’ talent.”

“So, if people ask me if that is a good or a bad thing my answer is that Tiger’s return has been so positive you only have to witness the fan reaction at the tournaments Tiger has elected to play this year.”

“As well, the energy amongst all the players on the Tour, along with the desire to beat each other now that Tiger is back playing full-time, is as high as it has ever been.”