Former US Open champion Michael Campbell is hoping to arrest his flagging career after signing a deal to represent Piranha Golf, the Australian-based clubs manufacturer.

Campbell signed a sponsorship deal that sees the Kiwi star sign a 10-club deal, along with a smart black-and-yellow Piranha bag plus he will wear shirts with the company’s logo. 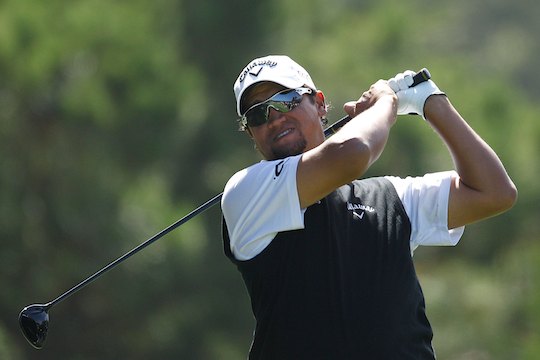 “This is one of the first big changes in clubs for me in my career and I’m looking forward to representing Piranha Golf,” said Campbell.

“I was with Callaway for about eight years but overall I was with them for about 15 years.”

“But I’ve now signed with Piranha Golf for three years.”

“So I believe we can align together well.”

“They do have a few guys competing on the Nationwide Tour in the States but they were looking to sign a player competing on either the European Tour or PGA Tour and it’s just come along at a good time for me.”

This year marks Campbell’s 19th season in the pro ranks and despite a downturn in form since capturing the 2005 US Open, the now Switzerland-based golfer is looking forward to his new season.

“Now that the family is settled in Switzerland, I am looking forward to concentrating more on my golf,” he said.