Next time your knees are shaking over a three-footer to win $5 from your mates, spare a thought for star poker player Daniel Negreanu. 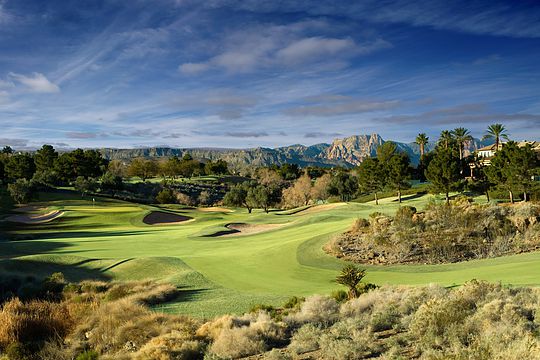 He once made a bet for $US550,000 with someone that he could shoot 80 off the back tees at the tough TPC Summerlin course in Las Vegas, the course that hosts the Shriners Hospitals for Children Open.

Negreanu also revealed on a recent episode of the No Laying Up podcast that he often played golf with another poker ‘giant’ Phil Ivey and once lost $US1.2m to Ivey in a single day on the course.

Yet his efforts to shoot 80 or less at Summerlin was an enthralling tale.

Negreanu, 45, said he only began playing golf in his early 30s, and eventually began gambling on the course for very high stakes.

When he made the Summerlin bet he had a year to transform his game…and he won the bet with just a few days to spare.

He explained: “My golf game was not very good. The back tees at TPC Summerlin are about 7,000 yards.”

“I bet them that if they gave me a year, I could shoot 80 from the back tees.”

“And with about a week and a half to spare, actually, I was two-under after nine.”

“So then all the carts started coming out, because they were like ‘oh boy, here he comes.’”

“There was probably 60 golf carts on the last three holes, sweating me.”

“And so, in the last three holes, I needed to go bogey-bogey-bogey to win the bet. They were the three toughest holes, also.”

“The first one is the easiest of the three, so I, of course, double-bogey that.”

“And then I have a six-footer for all of the money to win. I’m actually a good putter, but this putt – I hit the putt, and as I hit the putt, my knees sort of fell to the ground, in a way, but somehow the ball went in and I made it.”