Melbourne’s Alistair Presnell has turned his season on its head over the past fortnight, recording a 2nd place on Sunday in the Miccosukee Championship in Miami, Florida to vault into the Top 25 on the money list.

This result comes a week after a tie for 3rd at the Neediest Kids Championship in Maryland had broken a run of five missed cuts in his past six events. 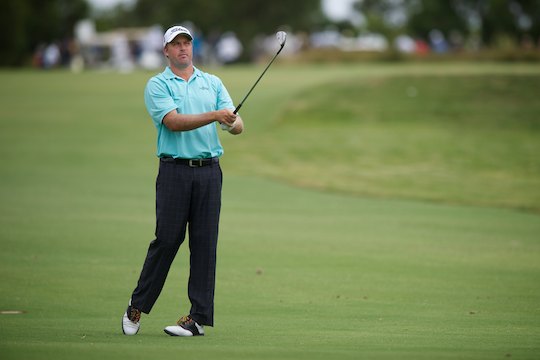 Presnell shot a final round four under 67 to claim runner up honours behind American Shawn Stefani, who won in a canter by 5 shots.

Presnell joins fellow Aussies Cameron Percy and Scott Gardiner in the all important Top 25 who at season’s end, will earn promotion to the PGA Tour in 2013.

Percy and Sydney’s Aron Price also finished inside the top 10, tied for 9th at 2 under with Gardiner and Steve Allan a shot back in a tie for 13th.

The Web.Com season concludes over the next fortnight with this week’s Winn-Dixie Jacksonville Open in Florida followed by the season finale Web.Com Tour Championship in Texas the following week.