Australia’s best performing, male or female, golfer on the international stage in 2017, Leishman won the coveted award following in the footsteps of Jason Day who won the Greg Norman Medal in 2015 and 2016. 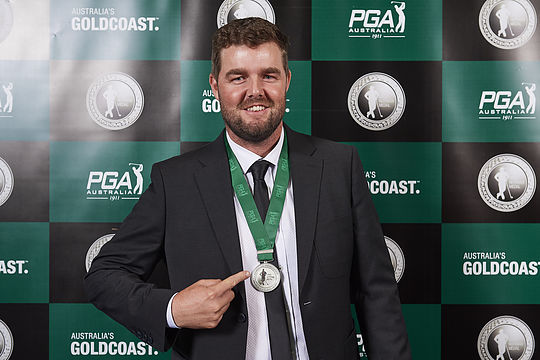 “To win the Greg Norman Medal is an incredible honour. Like all Aussie golfers Greg was a hero of mine so to have earned an achievement in his name makes it that much more special,” said Leishman.

“2017 has been an incredible year for my family and me with the birth of our daughter and winning the Greg Norman Medal certainly tops it off.”

“It’s a massive honour, I think about all the things Greg Norman has done for me, he’s been such a role model.”

“Lifting the Joe Kirkwood Cup on Sunday as the Australian PGA Champion would take it to a new level.”

In 2017 Leishman stood up and made the world take notice. Long heralded in Australia as one of our brightest talents, Leishman has often been overlooked by the international limelight.

But the boy from the ‘Bool created a name for himself winning twice on the PGA TOUR in 2017 at the Arnold Palmer Invitational and the BMW Championship.

In addition he recorded a further four top-10 results, including a tied sixth at The Open, in 23 tournaments played this year. These brilliant results have seen Leishman reach his highest ever ranking of World Number 13.

Leishman was an integral member of the International Team for The President’s Cup and also represented Australia in the World Cup of Golf at the end of 2016.

Greg Norman couldn’t be on the Gold Coast for the Awards Ceremony but sent Leishman a video message.

“The Greg Norman Medal is presented each year to the Australian golfer who has had the best season. However it’s about more than just performance,” said Norman.

“I’m honoured to announce Marc Leishman as the 2017 Greg Norman Medal winner. Marc is an incredible talent but as a laid back Aussie, has often flown under the radar. However this year he’s made the golfing world take notice. Congratulations Marc on an incredible season.”

The other highlight of the evening was PGA Life Members Alex Mercer and Charlie Earp being elevated to Immortal status.

A true character of Australian golf, Earp has nurtured many of the greatest Australian golfing talents the world has seen. Having coached Greg Norman, Wayne Grady, Karrie Webb and Adam Scott amongst many others, Earp is one of Australia’s most recognised golf coaches but his contribution to the game goes well beyond this.

Having completed his PGA Traineeship at Coolangatta Tweed Heads Golf Club and joining the Association in 1945, Earp has more than 59 years of experience within the golf industry where he has made his mark not only as a player but also as a coach.

The evening also saw members of the professional golf circuit, corporate world and golf community gather to celebrate the achievements of both Tournament and Vocational PGA Professionals.

The other awards and there winners presented on the evening included:

Australian Club Professional of the Year

Australian Coach of the Year

Australian Club Manager of the Year

Australian Teaching Professional of the Year

Australian PGA Trainee of the Year

ALPG Player of the Year

Legends Tour Player of the Year

ISPS HANDA PGA Tour of Australasia Player of the Year