Mary Dodds is living proof that golfing greatness can be achieved on any handicap and at any age.

The 77-year-old has become a golfing legend at her home club, The Federal, in the ACT, after taking out the nett prize at the 2011 Belconnen Women’s Open. 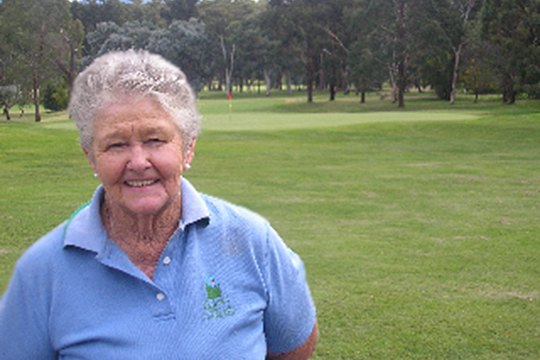 ON A ROLL: Federal Golf Club’s Mary Dodds at 77

Playing off a handicap of 34, Mary blitzed the field. Her 90 off the stick was just eight strokes behind the scratch winner on the day.

“From a field boasting numerous single-figure handicap golfers, the overall lowest scratch round for the day was 82, which gives an indication of just how good Mary’s score was,” says Federal member, Bev Cains, who alerted Golfer Pacific to Mary’s achievement.

“The Holy Grail for any golf professional is to shoot 59 on a par-72 golf course; 13-under par, which is a rare feat. Mary’s nett 56 is a whopping 17 strokes under par,” boasts Bev.

Mary Dodds is a well-known and colourful figure around the Belconnen fairways.

A former Vice-Captain and Captain at the Federal and a regular representative at inter-club matches, Mary certainly didn’t lack experience going into this event.

“There was a distinct purple patch which commenced with consecutive pars on holes eight and nine, a bogey on 10 followed by four straight pars on 11 through 14 that included a chip-in par on 13, which was a real highlight. She amassed an incredible 26 points for each nine,” says Bev.

When Golfer Pacific tried to contact Mary for a comment on her big day out, her husband Neville reported her lost in action.

“She’s on the golf course, again,” said Neville. “I rue the day I ever taught her to play. Now I’m left a home-alone husband”.

Well Mary, we like to salute golfing greatness at all levels, so enjoy what you’re obviously good at!