There’s big money to be made on the women’s professional tour in Japan and Queensland’s Karis Davidson wants to get in and grab a piece of it.

The former gun amateur has made the decision to turn professional and backed that up by playing some superb golf at the Japan LPGA qualifying school last week to earn her ticket on that tour in 2018. 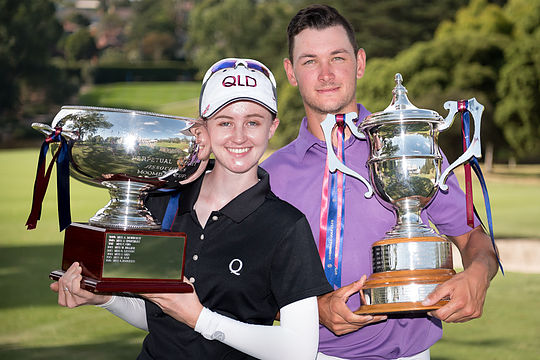 The experience Davidson gained from representing Australia at the World Amateur Team Championships and the Queen Sirikit Cup stood her in good stead as she progressed through all four stages of what is regarded as a gruelling qualifying test.

Naturally the Queensland Academy of Sport member was delighted to be hitting off the next stage of her career.

“I’m really excited to have turned professional and I’m looking forward to the years ahead and experiences to come,” Davidson told Golf Australia.

“Q-School was difficult especially starting from the first stage, but a fun and exciting feeling to keep passing the stages.

“When I get back to Australia I will sit down and mark out my goals; it’s been pretty full-on trying to organise things for next year.”

Following her success, Davidson immediately caught a train across Japan to visit members of the Australian team playing in the Queens Cup including close friend Hannah Green.

“The Queens was great to visit and see all the girls and catch up with how they were doing,” said Davidson.

“It was great to watch the golf as well.”

“Karis is always looking at ways to make herself the best she can be,” he said.

“Be that on the practice fairway or in the gym, she is a valued team member of the Queensland Academy of Sport and a great role model for her QAS team mates.”