Bonhomme, a winner on the Asian Tour and two state PGA titles, sensationally declared he was nothing more than ‘a very ordinary amateur’ that had pipe dreams of making a living out of the game. 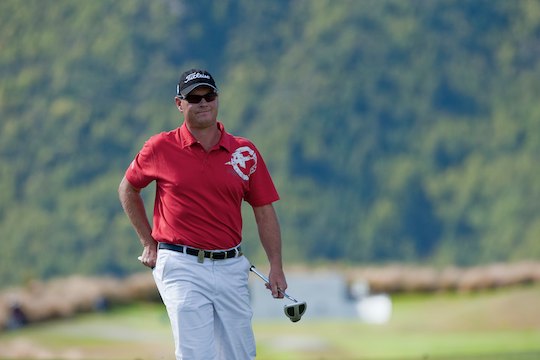 The Sunshine Tour veteran was aiming for a fond farewell at last month’s Australian Open at the Lakes Golf Club in Sydney, but withdrew due to lack of preparation brought on by the birth of his third son.

“Well it wasn’t how I wanted to end my full-time playing career but it was for the right reasons,” Bonhomme announced on his website www.abgolf.com.au

“I was trying to squeeze too much in such a short space of time and with no preparation I had to withdraw from the Australian Open.

“I was hoping to end my 17-year pro career at our national Open – an event I had to skip a number of times due to date conflicts with foreign tour schools over the past 17 years. About 19 years ago a very ordinary amateur had pipe dreams of being a pro and I was a bit naive on what my chances were to make money from the game.”

In the end, a reflective Bonhomme made the startling admission that he was simply not up to competing professionally anymore.

“My game was nowhere near tour level but it didn’t take me long to work out I had to work my butt off if I had a chance,” he said.

“Over that period I have met some fantastic people, some very ordinary people and learned so much about Andrew Bonhomme.

“I won on the Asian Tour, played in 35 countries, won two State PGA titles, 40-odd pro-ams and made some fantastic friends.

“I wish I had kept a journal of my stories, actions and decisions made over that period.”

Bonhomme said he lost the determination following a couple of tough years on the demanding US Nationwide Tour, where he looked to have secured his card on the US PGA Tour in 2007 before falling at the very last hurdle in heart-breaking circumstances.

“This year I have felt different and the focus, determination, discipline and to tame it down, the mongrelness hasn’t been there,” he said of his desire to compete.

“Throughout the ups and downs of my career I have never had an issue with the work required to be competitive and to climb back up the ladder after falling, but in 2010 I just didn’t want to do it anymore.”

Bonhomme said he was looking forward to spending more time with his growing family and importantly, putting himself in a better position to support them financially.

“The pain of being away from my young family up to 10 weeks at a time, the stresses involved with financing it and the lack of prizemoney versus costs ratio finally blocked out the good things,” Bonhomme said.

“No longer did I feel excited about trying to get the best out of myself or competing against my peers for trophies and financial reward. Over the past three months I have gotten myself into the mining industry (above ground) and have played about four games of golf.

“I haven’t missed the game at all and that is when I knew my heart wasn’t in it anymore. Pro golf is a very selfish profession and to succeed golf must come first at all times. I have had some unbelievable support from my family and friends and can never thank them enough, especially my wife Simone.

So what does the future hold for the man known as ‘AB’?

“After a break I will probably play some local events if I still desire to see what I can do,” he said.

“I am proud of what I have achieved. I probably could have achieved more but in the end I want to stop now before I hate the game. My achievements, the enjoyment from getting the best out of myself deserve for me to not dislike the game but be proud of the fantastic game that it is.”