It was a nice step up from the B Grade foursomes trophy at Sorrento in Victoria.

Yet Mary Thomson, the wife of the late, great Peter Thomson was delighted when handed a special replica of the 1965 claret jug to commemorate the victory by the man most rate as Australia’s greatest-ever golfer. 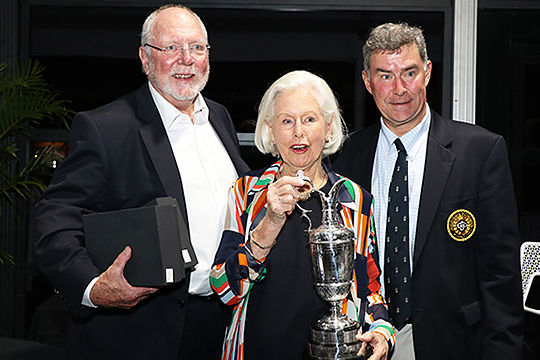 Mary suggested it was the first time she’d been handed a trophy in 20 years and was a lot better than the trophy she and Peter had won at Sorrento all those years ago.

Peter and Mary’s son Andrew was also present and relayed the story of how he took the 1965 claret jug to school for “show and tell” as a four-year-old and arrived home in tears because one boy said: “My dad’s got 12 of those”.

The trophy is a sterling silver 90 percent scale replica of the iconic trophy and is engraved across two tiers with the names of Open champions in the years up to and including 1965.

The presentation of the replica Claret Jug was made by R&A chairman Clive Brown.

Brown also presented Mary and Andrew Thomson with commemorative tee markers that were used during the first round of The 147th Open at Carnoustie.

Mary Thomson was delighted to accept the trophy. “It was his greatest honour to be part of the Royal and Ancient Club,” she said.

“It was very, very special to him always. It’s why we bought our house in St Andrews.”