Rachel ready for the quieter life

She’s one of the most popular professionals – man or woman – that Australia has produced.

Now Rachel Hetherington has opted for the quiet life after retiring from the richest women’s golf tour in the world, the US LPGA. 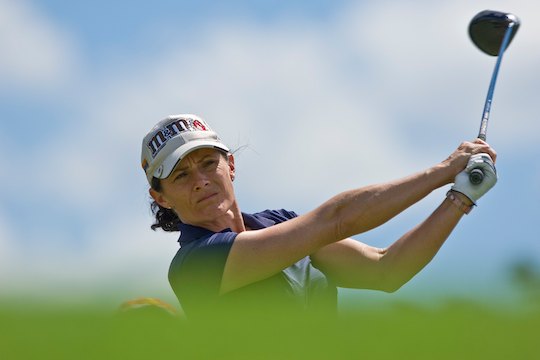 Rachel ready for the quieter life

Married to former Test cricketer Greg Richie, Hetherington is selling her Florida home and moving back to Australia – for good – to be closer to friends and family.

Rachel sat down with Golfer Monthly’s Michael Court to take a look back at her career and the highs and lows of being on the road “forever and a day”.

Michael Court: Rachel, when you were a young girl playing amateur golf and living with your father in Gloucester, did you ever expect that golf could carry you this far?

Rachel Hetherington: I never really thought how far I could go in the game. I just loved practicing so much and was looking forward to the excitement of playing professionally.

Michael Court: Are there any goals left for you now that you would still like to achieve?

Rachel Hetherington: I’d love to be able to ride a skateboard (Rachel fell off a skateboard and broke her ankle, costing her several months off the tour while recuperating). I’ll stick to getting better at surfing though.

Michael Court: Will we see you play some pro-ams – or Aussies events this summer? Will you maybe head for Canberra for their big event? Is there any chance other parts of Australia may get the opportunity to see you in action, maybe farewell you in style?

Rachel Hetherington: I am unsure of what I will play in Australia, at this stage. I would definitely love to play the Aussie Masters and the Open, however, I haven’t looked at the entire schedule yet.

Michael Court: Will you be living near your Mum and sister on the Gold Coast?

Rachel Hetherington: Greg and I will be living in the Tweed Heads area. I have finally dragged him over the border into NSW.

Michael Court: Being married to a former Test cricketer, how much interest do you have in cricket? Is that the second-most talked-about subject in your house, behind golf, of course?

Rachel Hetherington: I have always enjoyed watching cricket, and I was intrigued by the success that the Australian team achieved in the early 2000s that culminated in a group of the Aussies going from the States to watch the one-day series in the West Indies.

But I admit I don’t know the finer details of the game.

I do embarrass Greg at times by getting the field placings mixed up, and we now can’t keep up with all the new players coming through. Shani Waugh and Karrie [Webb] are the girls you want to talk to about cricket.

Golf is still the most talked about subject in our house – only because Greg loves it so much, then surfing is probably the number two subject.

Michael Court: Would you go and watch a cricket match with Greg now that you’ve retired?

Rachel Hetherington: I might be able to drag Greg to a match, but he really doesn’t enjoy it – and I should understand that as I don’t enjoy watching too much golf either.

Michael Court: Another champion, Lorena Ochoa also quit this year. How good was she and has she quit the game too early?

Rachel Hetherington: Lorena was an incredible player, and one of the few players that played with so much feel for shots.

She really does have a wonderful family and her family life is very important to her. She once said she enjoyed playing to inspire the people she can help. It’s refreshing to see an athlete so balanced and grounded.

Michael Court: Will we ever seen Annika [Sorenstam] back on the circuit?

Rachel Hetherington: That will be up to Annika, but, I don’t feel that she will be back.

Michael Court: What drives our own golfing superstar Karrie Webb these days, now that she has won so many events?

Rachel Hetherington: Karrie is still very driven, and she still wants to improve. As we get older we appreciate the things we have at home, and I believe she works hard on the weeks she’s playing so she can enjoy the weeks she has at home.

Michael Court: Who has been your best friend while you were on tour?

Rachel Hetherington: I have really enjoyed the friendship with Karrie as well as Shani Waugh, Lindsey Wright and a few of the European girls as well.

Michael Court: Living out of a suitcase is never easy – but are you over all that. Will you sell or keep your place in Florida?

Rachel Hetherington: Yes, I am well and truly over living out of a suitcase – that is the main reason I have retired from playing in the United States.

I just don’t enjoy travelling and all that comes with it nowadays. Yes, we will be selling our house in Florida.

Rachel Hetherington: My favourite course has always been the New South Wales Golf Club, and my second favourite is probably Murwillumbah, here in northern NSW . . . it’s a gem in the country.

My most favourite event in the States was the Nabisco Dinah Shore – for the ice creams, and outside of the US was the Evian in France each year – it is just beautiful there.

Michael Court: So what advice would you have for the young kids coming through now that might aspire to be even half as successful as you?

Michael Court: Who were your golfing idols while you were growing up?

Rachel Hetherington: Seve [Ballesteros] was always my idol. I used to pretend I was Greg Norman when I was on the practice range, but I have always loved the passion and rhythm that Seve had.

Michael Court: What do you rate as the best round you ever shot?

Rachel Hetherington: The best round to win an event was a 65 at the Jamie Farr classic in Toledo, Ohio. The home of Klinger from MASH!

The best round I have ever shot was a 66 in the recent Canadian Open. It was a great feeling to know that I can still do it.

Michael Court: What about the best shot or shots you’ve ever played, under pressure, of course?

Rachel Hetherington: A seven-wood into the final hole of the Evian Masters. Also the up-and-down out of the back bunker to birdie the par-five and win by a shot. All my favourite shots were under pressure – I love it!

Michael Court: Have you played your last major championship Rachel?

Rachel Hetherington: Yes, I have played my last major. To be realistic, I just don’t want to put in the practice that’s needed to be competitive.

Michael Court: Will you play any social golf?

Rachel Hetherington: Greg will drag me out to play. I am actually enjoying social golf far more than I used to.

I’m still competitive though and will get grumpy if I don’t play well. That’s where Greg’s comedy is a nice balance.

Michael Court: Can you still beat Greg – when you get serious?

Rachel Hetherington: Well, I have to play well to beat Greg. We do have competitions with each other and I don’t like to lose any of them.

Rachel Hetherington: That’s a tough one. I think as someone who gave their best when playing. I have been very driven and had high expectations, but, I think that was something that gave me success too.

Michael Court: Thanks Rachel, you’ve always been a pleasure to deal with and given us plenty of exciting golf for so long. Good luck in the future.