It’s hard to believe Jon Rahm only won a single tournament all season. But the Spaniard was seemingly in the mix every other week, and that’s what got him over the line for the PGA of America Player of the Year Award.

Rahm racked up a total of 75 points Player of the Year points, including 30 points alone for his major win, edging out Bryson DeChambeau, who finished in second place with 70. Rahm finished second to Justin Thomas last year. 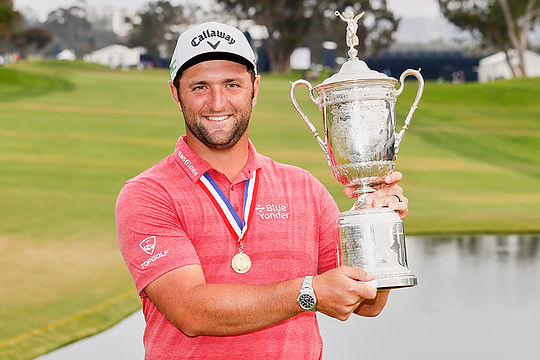 Jon Rahm’s US Open win earned him almost half the points needed to win the PGA Player of the Year Award (Credit: USGA)

Rahm, a six-time PGA Tour winner, finished inside the top-10 fifteen times, two second and third placings and a breakthrough win at the US Open for his first major title.

With the results; come rewards. And what a year it’s been for the 26-year-old. Rahm had already banked US$7,705,933 in prizemoney before the Tour Championship. That figure doesn’t include the almost $1.7 million he would have won at the Memorial, where he was six strokes ahead of the field with one round to play.

Also of note; under PGA of America rules, the lowest scorer in any tournament is the figure used to earn Player of the Year points. Under the FedExCup starting strokes format, Patrick Cantlay won the Tour Championship. But Jon Rahm and Kevin Na actually fired the lowest total that week (266) and shared 10 points for their efforts.

The World No.1 also narrowly won the Vardon Trophy race, finishing with an adjusted scoring average of 69.300 from 86 rounds. Dustin Johnson was runner-up just a third of a stroke back at 69.619.