World No.1 Jon Rahm has been voted 2021 DP World Tour Player Of The Year for the second time in three years.

The 27-year-old won the peer-voted Seve Ballesteros Award following what can only be described as a superlative year of golf. 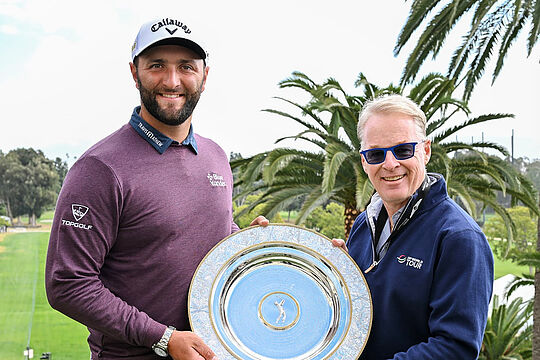 In 2021 Rahm claimed his first major championship and became the first Spaniard to win a US Open and just the fourth ever to win any major alongside Sergio Garcia (1), José María Olazábal (2) and of course the award’s namesake, Seve Ballesteros (5).

As well as his victory over Louis Oosthuizen at Torrey Pines in June, Rahm dominated each major that year finishing in a share of fifth at the Masters and tied for 8th at the PGA Championship before finishing the year off in style with a share of 3rd place at the Open Championship in July behind another first-time major winner, Collin Morikawa.

“Winning anything with Seve’s name on it is a huge honour for me, as is the fact that this is voted for by the players of the DP World Tour,” said Rahm.

“It is very unique to be recognised by your peers like this. It is a true honour to be able to win this award for a second time and hopefully I can continue to make the DP World Tour proud.”

His consistency saw him record 15 top ten finishes on the PGA Tour along with a 7th place on the European Tour’s Scottish Open earning him a cool $8 million for the season.

Rahm also took his stunning Tour form to the Ryder Cup at Whistling Straits in September, where he finished as Europe’s leading points scorer with 3½ points from his five matches.

“Jon’s form throughout 2021 was simply outstanding and his victory at the U.S. Open, in front of his family, was undoubtedly a highlight that will live long in the memory,” added European Tour group CEO, Keith Pelley.

“That cemented his place among the pantheon of Europe’s all-time leading players and his contribution in the colours of Europe at the Ryder Cup also demonstrated what an extraordinary competitor he is.”