Spanish star Jon Rahm earned a spot besides some of the greats of the game last week when he sealed the 2017 Sir Henry Cotton Rookie of the Year Award on the European Tour.

Several in-form players had an opportunity to chase down Rahm if they performed well at the recent Nedbank Challenge. 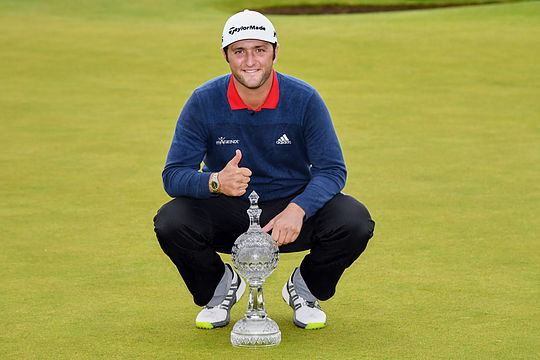 England’s Jordan Smith, South Africa’s Dylan Frittelli, Hideto Tanihara of Japan and New Zealand’s Ryan Fox were all some chance of overhauling Rahm in the Race to Dubai if they finished strongly enough.

Yet none of them could make up the leeway and Rahm was declared the rightful winner of the award, on the back of his successes in the Dubai Duty Free Irish Open.

He then backed that up to win the season-ending DP World Tour Championship, which would have secured the title anyway.

And why not? Rahm is now ranked No 4 in the world and appears to have the game that will win major championships before his career winds down.

Certainly it’s been a meteoric rise to the top of the world game for the 23-year-old, who only turned professional in June 2016 following a glittering amateur career where he represented Arizona State University in the United States, winning 11 titles and reaching World Amateur No. 1 along the way.

His transition to the paid ranks was a seamless one and he earned his maiden professional title at the PGA Tour’s Farmers Insurance Open in the US in January, holing a 60-foot eagle putt on the final hole to clinch the title.

Rahm then joined the European Tour and almost immediately emulated three of his Spanish golfing heroes – Seve Ballesteros, José María Olazábal and Sergio Garcia – with a stunning win in the Dubai Duty Free Irish Open, storming to a six-stroke victory at Portstewart Golf Club with his 24-under-par total of 264 being the lowest in the tournament’s illustrious history.

Rahm becomes the first Spaniard to win the Sir Henry Cotton Rookie of the Year Award since Pablo Larrazábal in 2008, and the fifth in total, with Gonzalo Fernandez-Castaño (2005), Garcia (1999) and Olazábal (1986) also having claimed the honour.