Travis Smyth has changed a lot over the last twelve months.

A new approach and commitment towards his game has seen the 21-year-old bag an impressive list of recent results, including a win at the Riversdale Cup and making the final at the Australian Amateur. 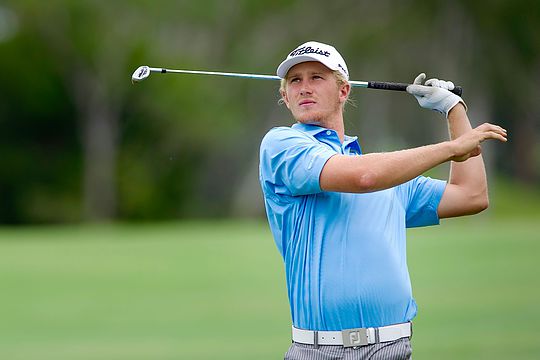 With a current R&A World Amateur ranking just outside the top-100, Smyth is set to embark on another challenging period as he prepares for his second tour of the US in a few months – this time being more experienced and ready to compete against the world’s best.

“After winning the Riversdale Cup last year I knew I could win the bigger events and it motivated me to work harder to get another,” says Smyth.

“I’m practicing with more focus, which was something I lacked before. I enjoy the hard work and I’m amongst a good fabric of mentors and mates and we push each other. I’m in a good space at present and that’s flowing onto my game.”

Having known Smyth and watched his development since 2012, the change is noticeable with his level of commitment and intensity towards achieving his goals. It sets him apart from two years ago when he won the Queensland Amateur title and was sitting on a R&A World ranking of outside 300. He’s a totally different player.

Smyth has also been fortunate to have one of the best coaching teams supporting him with John Serhan and Dean Kinney guiding him through the peaks and troughs of amateur golf. The pair have been there from the days when Smyth was competing in local Vardon events right through to the tough US Amateur circuit.

“John and Dean are always there supporting and guiding me,” says Smyth.

“Working with them has seen me become more structured and it’s very different to when I was practicing by myself. I didn’t really know what to do and what I needed to do to compete at the elite amateur level. They have shown me the difference between playing good golf to playing elite amateur golf.”

Serhan and Kinney work hard as each other and want Smyth to be one of the world’s best amateurs at year’s end. Elite amateur golf has become extremely competitive and comes down to a handful of moments in a season where a player can make their mark.

This year Smyth wants to make his mark in the US and from there evaluate his position, with a probable move to the professional ranks. With a new mindset and a dedicated support team, Smyth has become a force to deal with.

“I’m not trying to associate myself with any particular results right now but rather I’m staying in the moment,” says Smyth.

“The US this season is important to me and I know that I can compete there. I’ll be aiming to always try and get myself into contention and feel the pressure. I did that at the Australian Amateur and I just love being in the hunt come the final day.”