Former Ladies European Tour player Jo Mills is enjoying her new job at Pacific Dunes Golf Club, but she still regrets bowing out of professional golf the way she did.

Despite winning twice on the LET and competing on the USLPGA for four years, Mills said she quit in June last year mainly because she was broke. 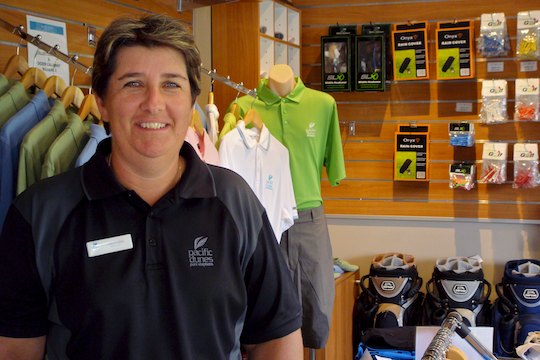 New Job: Mills all smiles as an assistant pro at Pacific Dunes

“I didn’t play very well in 2009 and I really didn’t have much money so basically I had to sell my car to get back over to Europe for 2010,” said Mills.

Mills headed off to Europe with a goal to earn enough money in the first section of the Tour to sustain her for the rest of the 2010 season.

“It didn’t happen, I didn’t play well enough and I just ran out of money. That was one of the reasons why I decided to say, OK I have had enough,” she said.

Regretfully Mills was forced to pull the pin just before two of her favourite events, the Evian Masters and the Ladies British Open in June last year.

“I also picked up a few injuries, with the travelling and playing it was just getting too taxing on my body and that is one of the other reasons I quit,” she said.

But don’t mistake Mills’ comments as bitter. She is just stating the way it is for so many pros. And she feels very lucky to have her job at Pacific Dunes on the New South Wales Hunter Coast.

“Within a month of getting back from Europe I walked into a job which I was really surprised at considering I have no sort of tertiary education,” she said.

“I went through high school and went straight to work at Oatlands Golf Club in Sydney and then went out on tour for 16-and-a-half years.”

But she admits it has been a challenge to adapt to her new life.

“The first couple of months I thought ‘Oh what have I done. I miss it so much I wish I was back out there’. But at the end of the day I made the right decision,” she said.

“It’s been good fun, we have a small membership here and it has been fun getting to know them a little bit more personally.”

“I had never really been to Pacific Dunes prior to working here and it is a fantastic golf course and probably one of the toughest I have played in New South Wales.”

And while Mills is busy as the Assistant Professional at Pacific Dunes she also wears another hat, board member of the ALPG.

Already she has an aim – to raise the profile of women’s golf across Australia and to chase more sponsorship.

“We undersell ourselves a lot. I think we are worth a lot more money than we get offered,” she said.

“We do exactly the same sort of job the men do, we just don’t hit it as far as they do.”

“You will see a lot more players willing to go to the pro-am parties and mingle with sponsors and guests, more so than the men, who think it is a bit of a chore, and I think we should be given a bit more credit for what we do.”

“That is something I really want to change.”