It’s so often said golf mirrors life. If you’re happy and playing well on a golf course the fairways can seem as wide as Sydney Heads.

If you’re struggling with your game and those same fairways can look as tight and narrow as the narrowest of city laneways. 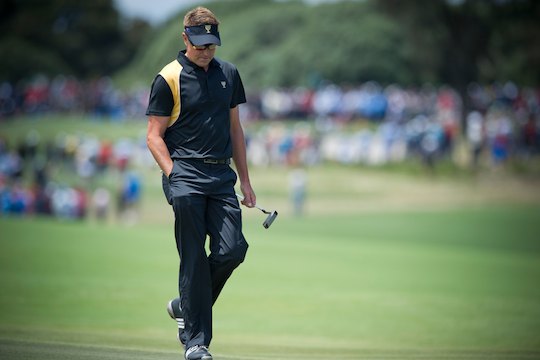 Robert Allenby is no stranger to the ups and downs of professional golf but his current run of PGA Tour poor form is certainly testing the mettle of the 41-year old so much so he’s revealed he was so scared and intimidated, he felt like throwing in the towel.

“It honestly felt like I didn’t belong out here anymore, even with what I’ve achieved in my career – 22 wins around the world and six Presidents Cups appearances,” he said.

“I felt scared and intimidated. I was going to quit.”

Heading into last week’s Tampa Hill Championship, Allenby had made just two cuts since June last year and he joked: “They were two WGC events where there was no cut.”

Since a share of seventh at the FedEx St. Jude Classic in Memphis it’s been Heartbreak Hotel for Allenby and not having played four rounds in 17 of 19 events and being forced to withdraw in another.

Allenby was exempt into last August’s WGC – Bridgestone Invitational but finished 69th in the 75-player no cut field while he was also well down the board in November’s WGC – Champions event in China and where there was also four guaranteed rounds.

It is arguably Allenby’s poorest run of form since turning professional more than two decades ago.

The closest Allenby’s come to another PGA win since his last victory in 2001 was in the 2012 Mayakoba Classic and nursing a two-shot lead walking onto the final tee.

Allenby wanted to hit 3-wood but his caddy encouraged him to use driver. He fanned the ball right into trees, made double bogey and then lost an eight-hole playoff to rookie John Huh.

“That kind of destroyed me,” he said looking back on the day.

And when you’re playing bad, the breaks continue to be bad!

Take the opening round of the Tampa Bay Championship here in Florida.

On the eve of the event at Copperhead Allenby was feeling a little run down and struggling with the symptoms of a sore throat and an on-coming head cold. He was prescribed some medicine but all the medicine did was make him feel drowsy.

Allenby stood on the first tee ready to go to sleep than being wide-eyed and ready to tackle the $5.5m prize money tournament.

What followed wasn’t pretty with Allenby posting a four over par 75 and his equal-poorest score in 17 rounds of the Innisbrook layout.

An example of getting an unlucky break was at the par four 11th. He’d just bogeyed three of the last four holes when his kicks left and lands right plumb behind a tree leaving him not shot at all.

“This season has been shithouse and I haven’t made a cut, except for two no-cut WGC events since last June,” he said.

“I’ve struggled with the driver this year which has always been a strong point of my game.”

Allenby reacted to an indifferent start to the new season by removing the white driver, 3-wood and 5-wood and replaced them with the black-coloured versions that helped him to two of his four PGA Tour victories.

“So, now I’m driving the ball a lot better but when you’re playing bad, you keep getting those bad breaks like taking the wrong medicine at 6.10 this morning,” he said.

“But while there’s no sign of any light at the end of the tunnel, I’ll keep plugging away because I feel good, and it’s just that I need to get some breaks out there because I’ve just constantly been getting bad breaks.”

“There was no better example of getting a bad break there at 11 where I find my ball has kicked hard against the back of a tree, and that’s what happens when you’re not playing well.”

“When you’re playing well you get the good break and a little bit of luck which is what you need in playing golf.”

“But I’m playing bad and that’s what happens. However I will keep preserving and see what happens and I will play every week when I can until I start playing good golf again.”

Allenby teed up on the Gulf of Mexico shoreline having quietly slipped to 249th on the World Rankings, and that’s a drop of 169 place since finishing in a share of seventh last June in Memphis.

Two years ago, Allenby went into the new 2011 season ranked as high as 21st in the world and the assurance of a tee time in all four Majors and all four WGCs.

He’s reacted to the downturn in returning to work at this year’s Northern Trust Open, and the venue of Allenby’s last PGA win, with former coach, Peter Crone.

“I told him he has a choice to make,” said Crone.

“He can snap out of it and stop playing the victim or he can keep revisiting these disappointing results and continue being unhappy.”

Allenby seems to have heeded the advice.

“I need to play my way out of this downturn in my game because I’m not one to sit around at home doing nothing,” he said.

“That’s not me. I need to be out here and while I am hopefully I’ll get to see that light at the end of the tunnel and work my way through all of this.

“Hopefully, I can put in one good round without any bad breaks and that will kick-start a turnaround.

“I’ve had bad spells in my career before but nothing like this before in my golfing life and I’m just lacking confidence.

“But the big plus is that I’ve got that black TaylorMade Burner back in the bag and that’s made me a lot happier.

“It’s the same club that some years back had me placed Number One in the ‘Total Driving’ stats or a top-10 every year with that club.

“So it’s like going back to the basics using the club and I’m also working my backside off trying to climb out of this trough I’ve found myself in.”