Becoming a Major Champion is certainly life-changing but when you need to employ security guards to watch over your house it seems all too much.

But that’s how Rory McIlroy’s life changed in a short few weeks since his commanding Congressional performance. 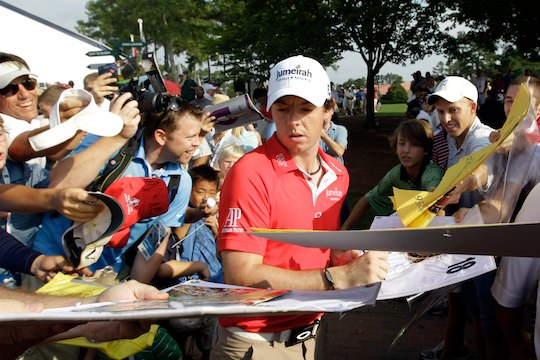 Rory McIlroy mobbed by fans at the recent US PGA

McIlroy has had security personnel watching over his Northern Ireland house night and day ever since his stunning eight-shot U.S. Open success.

“I’ve had security guards at my house every night since I won the U.S. Open just patrolling around the area,” he said.

“There have been people driving up the driveway and stuff like that which isn’t very nice. It is something that I just had to put in place I’m afraid.”

“It’s tough but it is just the world we live in unfortunately. If you’re in the position we’re in you’re so public.”

“It’s something I am just going to have to deal with.”

While his parents and friends have promised to look after McIlroy’s two dogs, he will have the security guards in place for some time and particularly when he rejoins the PGA Tour from next year.

He and his father, Gerry, recently sat down with manager ‘Chubby’ Chandler and other ISM agents to discuss his renewed assault on the PGA Tour.

It is understood McIlroy has been looking for an apartment in the West Palm Beach Gardens region of Florida, and close to the Jack Nicklaus-designed Bear’s Golf Club.

Freakishly, it was in a shopping centre at West Palm Beach that McIlroy and his father bumped into the ‘Golden Bear’.

McIlroy was competing in the Honda Classic, and in only his second start on the PGA Tour and he and his father had driven into the car park in one of the tournament’s official courtesy cars.

However, McIlroy had already made enough noise on the European Tour to attract Nicklaus’ attention.

“Hi, I thought it was you,” said Nicklaus in complete surprise to both McIlroys.

The 18-time Major winner invited McIlroy to visit the Bear’s Club and use the facilities.

It was the start of a special relationship as Nicklaus last invited McIlroy to have lunch but lunch at the Bear’s Club turned into a 90-minute master class in the ways to become a Major Champion.

“Where I’ll look for a place will not be far from the Bear’s Club, so it’s going to be nice to have that facility to practice,” said McIlroy.

“It’s just going to be nice to have somewhere to put all your stuff when you’re over here to the States for three or four months. I’m not looking at anything aside from an apartment or something like that, nothing big.”

And don’t be surprised when McIlroy sets up his new home he adopts the Bear’s Club as his new golf course attachment once his current deal with Loch Erne ends next year.

It will offer McIlroy some privacy to enrich his relationship with Danish tennis ace, Caroline Wozniacki.

After severing ties with long-time girlfriend, Holly Sweeney, McIlroy and Wozniacki were spotted in London having dinner together during British Open week.

McIlroy had been at Wimbledon two weeks earlier watching Wozniacki lose out in her fourth round encounter against Slovakia’s Dominika Cibulkova.

The pair was just seats apart that weekend in Hamburg at the World Heavyweight match between Brit David Haye and champion Wladimir Klitschko.

Wozniacki tweeted: “Fantastic fight. Also met Rory McIlroy, who was sitting just behind me. Really down to earth guy.”

Just as it was for Adam Scott when he was seeing Serbian tennis stunner, Ana Invanovic, McIlroy’s going to find his life under an even bigger microscope if he’s serious in dating Wozniacki.

“As I said, it’s the stuff going on at home that’s hard to accept.

“So much has changed in my life since winning the U.S. Open and there are moments when you think ‘What is happening here? What is going on?’, but playing full-time in America is always what I wanted to do.

“When you grow up and dream of being a professional golfer and dream of winning Majors, all you really think about is the golf and playing in front of great crowds and on unbelievable golf courses and winning trophies.

“You never think about the other side of it and that is the side that takes a bit of getting used to. It is also something that you don’t really expect.”