Outside of the Wells Fargo, world No.3 Justin Rose has been struggling with consistency of late missing the cut at the Masters and a 58th place at the recent Charles Schwab Championship…and maybe there’s a good reason for that.

Before bouncing back with a T13 at The Memorial on Sunday, Rose revealed that he has been forced to split with long time caddie, Mark Fulcher, who doctors have advised to take additional time off to recover from heart surgery he underwent in mid-January. 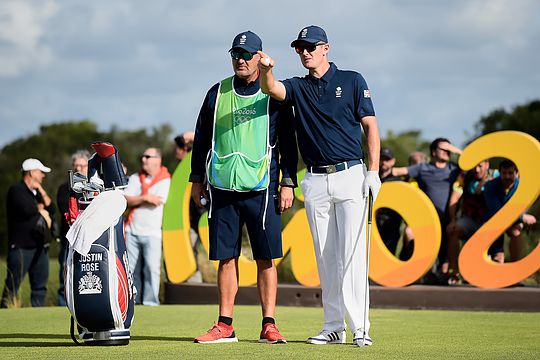 Justin Rose with Mark Fulcher at the 2016 Olympics (Credit: IGF)

Fulcher, nicknamed Fooch, returned to work at the Masters in early April and has been on Rose’s bag in his last four events leading up to last week’s The Memorial hosted by Jack Nicklaus.

“After an amazing 11 years with Fooch, our successful run together has finished for now, as Fooch is required to take an indefinite leave of absence from caddying to focus on his health and well-being,” tweeted Rose, who left the door open for a future collaboration.

“I also have no doubts that we will stride up a 72nd hole late on a Sunday afternoon together in the future.”

Rose and Fulcher have earned eight wins on the PGA Tour and seven European Tour titles with the highlights coming at the 2013 US Open and the 2016 Olympics, where he became the first golfer since 1904 to earn a gold medal.

They also claimed the 2018 FedEx Cup title and the $10 million bonus prize despite Tiger Woods winning the year-ending Tour Championship event in September.

The pair have a strong bond both off and on the course with Rose calling out his caddie in a press conference following his win at the Farmers Insurance Open this season while Fulcher was recuperating.

“Fooch, that was for you, mate. I’m sure watching us all weekend was harder than the heart surgery…Love you, and we’ll see you soon.”

Gareth Lord, who previously worked for Henrik Stenson and filled in for Fulcher earlier this year, will be on Rose’s bag for the foreseeable future.