Gabriela Ruffels has been awarded the 2020 AmateurGolf.Com Women’s Player of the Year, an award based on a points system earned through performance in major women’s amateur events throughout the course of the year.

Ruffels, 20, who is a US college-based Aussie at University of Southern California topped the order list on the back of stellar performances in college, amateur and professional events. 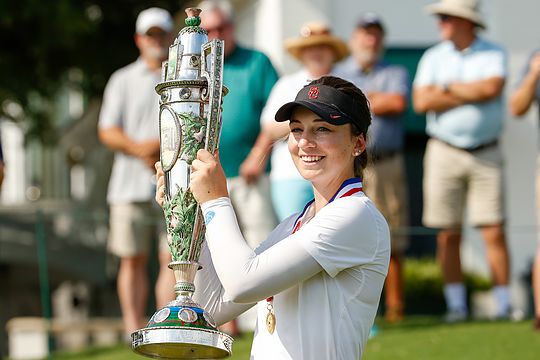 Ruffels accomplishments included a win in her final collegiate tournament of the year at the Rebel Beach Intercollegiate, a repeat finalist appearance at the 2020 US Women’s Amateur, a pair of top-15 finishes at two LPGA majors at the ANA Inspiration and the US Open (as well as an appearance in the British Open), and her second straight appearance in the Palmer Cup where she helped Team International repeat as champions.

Within COVID-19 decimating the US college season, Ruffels had three top-20 finishes in the shortened season, posting a 72.47 stroke average with three rounds in the 60s.

In October, she played in the Japan Women’s Open, but missed the cut and in July, became the first woman to enter the Jacksonville Amateur Championship where she went onto finished 51st.